After watching this Malayali movie 'Njan Prakashan' last night I was up at a comfortable hour. A walk to the medical shop at 830 and I found they were all shut. Then someone told me they open at 9 and close at 5. So I ventured out on the scooter to SR Nagar and found the medical shop was just about opening. A small crowd of 5 takes as long as 25 minutes these days.
For one there is no concept of a line. People rush in wherever and push their agenda. I can never get these guys - the least they could do is ask the other person if it was ok. I observed this guy closely today  - he simply sidled up and confidently got to the business at hand. He showed no tentativeness and the shop keeper was spellbound and forgot that there was a queue and served him first.

I yell at a few once in a while, like this guy who was behind me and was sidling ahead with the phone - apparently his doctor is on the line. But hey, I said, you can call your doctor when your turn comes dude. He looked at me like he never thought of that possibility and slid back.

Anyway, today is jhadu pocha day and I did a good job in fairly good time though I didn't time myself. And hen its time for lunch, some pending work and I suddenly found 'Bala' playing on some change and watched it. Time for meditation and some more work and its dinner time. Where's the time draining away? I lit the diya as I have been doing all these days. Which reminds me. I bumped into my doctor friend who told me that we must light a white candle on the 22nd to protest against the attacks on doctors. I said, I did not see him light one. He said it was called off - the government has a new law in place that those who attack doctors during the pandemic days will get 7 years. Which means that it's ok after the pandemic? And why stop the candle lighting? It can be done anyway right?

Story of the Day
I got a picture from Moses with a story behind it. Mrs. Kutty Paul, wife of Vijay Paul, our coach and manager and a much-respected cricketer in his days, received a special surprise birthday wish delivered by the police themselves. She lives in Sainikpuri. 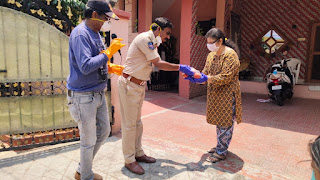 He sent a video of the policeman singing 'Baar bear hum ye gaaye..' rather tunelessly, but the intent was worth its weight in gold. Apparently it was done on the request of her older son who lives abroad and who wanted to come and surprise her on her 60th birthday but couldn't.
Wonderful gesture dear police.

The Painting Story
Ever since I read the story of the migrants who painted the school in Rajasthan, I have been thinking why communities cannot think of ideas like that to make the migrant population feel useful and earn their food in dignity. Their dignity must be maintained - they cannot be treated like beggars. The NGO Goonj operates on the principle where they do not give stuff away for free - they ask the recipients to help in some project and thereby earn their clothes etc.

Now we have big bunches of migrant labour stuck in shelter camps with no food and no employment. Surely they can be put to use. Make masks, gloves, whatever that they can do so they earn their food. Yes, follow all precautions, keep them in the same place so they do not spread any disease if at all, but while they are there, use them so it's a win-win. We need to come up with an equivalent to what the Rajasthan villagers did.

Au revoir! Or whatever the French say when they go away. (Sounds like reverse!)
Posted by Harimohan at 10:59 PM