Normal day. Wake up, journal, sit outside, listen to the birds, and then get right into work. Today I decided to sweep up the home AND mop. And, time it. I started off at 1030 and it went on and on till 12 noon! I don't think the maid takes this long. I need to figure it out and get it done faster. Bit of this and that and its time for lunch.

Today is also the day I decided to go out to buy some stuff. Considering that the Ratnadeep boy told me that the crowd is a little less between 230 and 4 pm, I decided to go out at 230. The roads were emptier than normal and then I saw the chicken shop was shut the medical shop was shut and even Ratnadeep was downing its shutters. Hey, what's happening? We have time from 7 am to 5 pm right? No sir, said the security chap, the cops came and shut us up. New timings are 7am to 11 am. Whoa. There are crowds that are 20-30 people long in the 7-5 slot. Now there will be crowds 50 strong I should think, translating to longer waits of up to an hour. Let me check tomorrow. Why did they change it without warning I wonder?

Ramnarayan and Vijay Lokapalli were on phone today. Some cricket talk. Meditation and some chats with Sanjay, Ranjan and Don over Zoom. And the day is done.

Pankaj and Aarti Are out Again
Despite the stricter enforcement of rules and regulations - now one needs to carry proof of residence so as not to flout the 3 km cut off - Pankaj and Aarti were out in the heat helping those in need.
Today Pankaj and Aarti packed and delivered 300 hygiene packs to the police department, who took it to deliver the same to tribal areas which are inaccessible and have no access to essential items.
They also arranged 5000 masks for the police.
Well done Pankaj and Aarti. You are doing amazing work. Procuring, packing, driving from Sec'bad to Gachibowli in the heat and helping out doing your bit is simply outstanding.
A word must go out to the police who are doing a great job and for whom Pankaj has only the highest respect now. Pankaj buddy, keep going and I will posting as long as you keep sharing!
Heroes for the day again!

Dr. Sundaragopal Sridhar and Team at CSIR-IICT Devise Low-Cost Masks
S. Sridhar was a fantastic all-rounder in his days, part of our team when we won the Inter-varsity tournament laying for Osmania University in 1990. 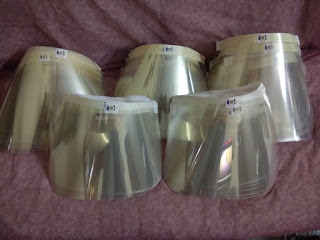 He graduated as a Chemical Engineer and then became a scientist at IICT. Today he is a leading expert in water purification technology, an award-winning scientist with over 40 awards, hundreds of papers and 2 books to his name. 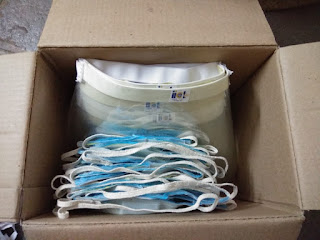 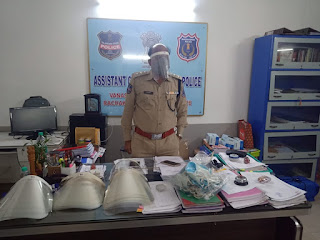 Sridhar had shared a low-cost mask he had devised a few days and today he shared the happy news that CSIR-IICT had delivered 100 protective face shields and 50 washable face masks to the ACP, Vanasthalipuram Division, for use by the police force. The ACP, despite his world load, sent a letter thanking the Director for the help provided.

Some Heartwarming Stories to Keep the Perspective Right
I came across a news item in Hyderabad's Khairatabad area where a Hindu man died due to TB but none of his neighbours helped - in fact the ostracised the family fearing it to be a COVID death. Five unknown Muslims helped and organised the last rites after hearing about the family's plight. Great job guys!Full marks to humanity.

While searching for this article I found another article about a similar situation in UP when Muslims helped cremate a Hindu who died of cancer in a curfew area. They chanted 'Ram naam satya hai' and performed the final rituals.

And another in Indore, where Muslims helped perform a Hindu man's final rites...

And so many more such stories

A Lamp for Dr. Simon Hercules Soul
And amidst, all this one heard the sad story of Dr Simon Hercules, who died treating COVID patients in Chennai and how people stopped his funeral by stacking the ambulance and helpers. His associate Dr. Pradeep Kumar performed the last rites himself with the help of two ward boys as policemen stood guard. Incredible. The doctor community has asked for a diya to be lit for Dr. Simon's soul. May his soul rest in peace.

Dr. Simon died in the line of duty. His death is no less than that of any heroes. He shall be remembered. And well.
While there are so many doing so much, the least I could do was light a lamp for Dr. Simon and countless others losing risking and losing their lives in these times. I decided to light the lamp every day for those on the frontline, for those who are suffering, and send out a prayer for them.

More Food Pics
Here's a couple of food pics of the day.
That's it for today!

Posted by Harimohan at 9:37 PM

Excellent post Hari on heart warming stories, happy to see our Pankaj bhai and Arathi bhabi for their humanatarian guesture in providing assistance to the needy and police during COVID crisis, god bless and thanks again for posting lively blogs.. looking forward more from your desk. Warm Regards