The morning routine is set. Get up, make that hot water, lemon, honey, salt, ginger concoction that I picked up from my mother-in-law. It's a serious process that involves several cups, gadgets, and raw materials. Once that's done I head out to the front year, get the chairs and settle down to sip on it. This is where I catch up on my messages. Vijay, Swaroop, Moses send me e-newspapers daily. Krishnan sends me sports magazines and some fine foreign magazines. I browse the headlines. Today Krishnan sent me e-comics of Archies and stuff. Then I do my gratitude journal, maybe make a couple of calls. Today I decided I am done with calls.
I realised that sweeping the house is a rather tiresome job as in it tires me out, so I did it. Then I settled down to prepare for my afternoon class. By now its almost time for lunch but I had to go shopping for some groceries and my medicines. So out came my mask, and off I went. I thought I'd check out Ratnadeep at SR Nagar. It was 1 in the afternoon and bloody hot and there were twenty people waiting outside. The Kirana store wall next door was rather empty. So i decided to head to my colony Kirana wall. But before that, I decided to look in on Polimera at SR Nagar. Hmm, not too many people. I stopped. 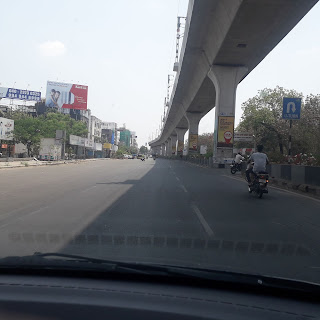 These guys were well organised. The security chap, a perky young fellow, kept us in line, poured hand sanitiser, gave us plastic gloves. There was a board outside which said 'No mask, No entry' Hmm. Thanks mask. The behaviour inside is a bit on the me-myself as people kind of rush in to get the best, in some fashion look after their best interests, and the others can go-to-hell. It shows in small ways, the voice modulations, the slight aggression with the basket etc. Anyway, got some fruits, some vegetables and wonder of wonders - the checkout counter was empty! Super impressed with Polimera.
Off I sailed towards the medical shop and bought a few essential medicines. I noticed everyone had a mask, even the banana vendor - where dd they get masks from/ All my previous attempts had failed - the one I use is something Shobhs bought from Pune. I realise that in a Noah's Ark kind of a situation - I am hopeless - the banana vendor will get on it before I do.

Then I realised one of the tires was low on air pressure and decided to go to the petrol bunk at Erragadda. The SR Nagar Police seemed to have cordoned off their area - barricades at SR Nagar Police station and then barricades near Rythu bazaar. I squeezed through, got a chap at the petrol bunk to fill up the air, paid him a handsome 20 and came homeward. I passed the colony grocer and he was packed.

I went home, did the sanitising work with all the stuff I got and with myself, and prepped for class after lunch, At 3 om my Zoom class began and it went fine until 430 or so. I crashed out in the evening meditation thanks to my exhausting day. I walked to the colony grocer to pick up a few things and he was already shutting shop - it was 530. I thought they were open till 6. This guy is so well stocked that he has everything I need. Anyway picked a few things before the cops came by and shut him down. Apparently, they are very strict and impose heavy fines if they stay beyond the time I was pretty impressed.

Table tennis with Anjali and then I settled down to some rock music by myself. Good stuff - ACDC, Def Leppard, Bangles, Journey Billy Joel, ZZ Top, Kiss, Blondie, Nirvana...lovely time was had.

Out in the cyberspace, I hear whispers of the lockdown continuing for another two weeks or so which is ok. Our school group which posts all wrong news and gory stuff has been hijacked by the admin who has been told that admins will be put in jail so no one can post anything! That cut a lot of noise out. But then a new cricketers group has begun and there are a few on it who are continuously behaving like priapic school boys. Waiting to see how long they will sustain.

I have a feeling most people are used to this lockdown life now. I checked with our maid Lakshmi who cannot seem to stay away from work despite us telling her to chill till the 15th. She comes and sweeps the forecourt. She tells me that she got some 12 kgs of rice (not happy with the quality of rice and service). Ramu, the next-door dhobi came and showed me his hand where his master's dog bit him pretty badly. I wonder how he managed to get bitten now.

I am thinking of slowly shutting down the phone now. That would be real peace. Maybe start with a day. I am already operating on silent mode. This might add to some more peace of mind.

Tomorrow I have an important mission - I need to get a mop - the current one as I reported earlier - lies in two pieces. Ratnadeep should be attacked - I wonder what a good time would be considering that twenty people are baking in the afternoon sun. Maybe early in the morning could be worth a shot.