I picked up this book a while ago. It's 640 pages long, 485 pages of actual story. It's quite comprehensive. Facts that hit me hard were that Bruce Lee died when he was just 32, died before 'Enter the Dragon' was released, struggled to make money and make ends meet for most of his life, was born in America, to parents from Hong Kong and his son Brandon Lee, died 20 years after Lee died in a freak accident while shooting for a Hollywood film. 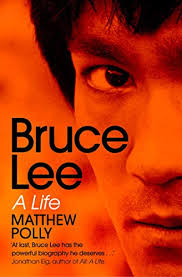 Bruce Lee's father was a poor Chinese artiste, good at comic roles in the opera. He escapes poverty and comes to Hong Kong to make a living. There he meets a rich young lady, who had mixed blood of a Caucasian in her genes, and she leaves her fortune to marry the struggling artiste. The young couple have three children of their own and also adopt a girl, despite their humble living conditions. When the father gets an opportunity to go with the troupe to the USA, his wife is advised to go as well, and they leave their children behind with their aunt and go to the US for a year. It is in the US that Bruce Lee is born. The couple come back to Hong Kong with young Bruce.

During the second world war when the Japanese occupy Hong Kong, they use the opera to entertain themselves and Lee's father earns some money and respect in society. He invests wisely in real estate and climbs out of poverty. He becomes a well-known face in films as well. Bruce Lee, a hyperactive baby, nicknamed 'Never Sits Still' has a good childhood in a large house with servants. He starts getting film offers from the time he is 6 years old and by the time he is 16, acts in 20 films. At school he gets into fights all the time and beats up kids. He learns a Chinese martial art Wing Chun and adds that to his repertoire of weapons to beat people up. He gets kicked out of schools, forms gangs, beats up people, gets better at martial arts, and finally does something that disgraces the family enough to send him over to America when he is 16. Bruce Lee takes the ship, leaving Hong Kong.

In America he stays with a friend of his father's and mother's who gives him a small place to sleep and a job of washing dishes for the Chinese restaurant they own. Bruce keeps his training going, gets better at his martial arts, promotes his style over other martial arts by giving demos, and also joins college. He meets his wife Linda at college, takes an interest in philosophy and dreams of starting a franchise of Kung fu schools. He gets Linda pregnant and the two marry despite opposition from Linda's side. Brandon lee is their first child. Lee is now some kind of a rebel in the martial arts community in the US, forever disparaging other forms and pointing out how his forms are greater. He teaches a small class - his one-inch punch, two finer pushups, speed, power and intensity are already folklore and anyone who has seen him becomes his student. But Bruce is still broke and has little money.

Somewhere along the line Bruce also authors a book on martial arts with another teacher. He realises that the big bucks are there to be had by teaching stars, and moves to Hollywood where he meets Jay Sebring a hair stylist who charges 50 dollars whereas all others charge 2 dollars for a haircut. Sebring  introduces Bruce to many Holywood stars who become his students - Steve Mcqueen, Roman Polanski, James Coburn are some of the names he works with. Mcqueen and Bruce become good friends. Bruce also becomes quite a ladies man. Eerily, Sebring, Sharon Tate (pregnant with Polanski's child) and others, are murdered by the Manson gang, all of them good friends of Bruce. He lived not far from the Polanski place where they were murdered.

Bruce's reputation as a terrific martial arts exponent spreads and Hollywood calls him to try for a couple of roles. He tries for Asian roles in Hollywood films and always gets close but never gets them. He writes a script, pitches it and almost gets a deal which falls through. At a time when he is wondering if his life will go anywhere, his film career is not taking off nor was his martial arts business, Bruce gets a chance to go back to Hong Kong. Bruce is by now reading a lot of philosophy - Jiddu Krishnamurthy - and a lot of self-help books. His library when he died had 2500 books and he was known to be reading all kinds of books at all times. Bruce writes a goal for himself - that he will be the biggest Asian star in Hollywood. Bruce also talks a lot of philosophy to his students - about being as limp as a rag to generate maximum power, to be like water, from less, to not follow any style. He starts experimenting with new styles and creates his own called Jeet Kune Do,

In Hong Kong, Lee gets a shot to make a film 'The Big Boss' which makes him a superstar. Bruce was not even keen on these movies they say, using them as something to leverage his deals with Hollywood. He is upset that his big Hollywood movie, 'The Silent Flute' gets shot because James Coburn turns down India as a venue to shoot the movie. 'Fist of Fury' follows the 'Big Boss', both Raymond Chow movies but Bruce is still broke. It is around this time that Bruce writes a story which is initially titled 'Blood and Steel' about a white man, a black man and an Asian who bust an evil empire with their martial arts. The movie is later titled 'Enter the Dragon' - a title chosen by Bruce Lee to launch himself - he was always known as the Little Dragon. The movie is shot in Hong Kong, some at Hollywood, and when they see the first cut they know, they have a hit. Bruce's market value shoots up, he takes big insurance, buys nice cars and for the first time has some serious money. He also shoots for 'The Game of Death'. Before the magnum opus 'Enter the Dragon' is released, Bruce suddenly collapses in his girl friend's house in Hong Kong and dies. It is suspected that he died of exhaustion and heatstroke. 'Enter the Dragon' becomes a blockbuster hit beyond anyone's imagination and Bruce Lee becomes a legend, a bigger star perhaps than Mcqueen as he always wanted to be.

It is amazing how much Bruce Lee achieved in his short life. How he pursued name and fame, but also how he pursued perfection in his art, in his physical capabilities. They say he was so fast that the camera could not capture his movements.  Once again one realises that while we look for success elsewhere (he looked for it in Hollywood) you find it in the most unexpected places. Enjoyed reading every bit of the book. In fact, I love reading his quotes and have a blog exclusively made of his quotes. Mathew Polly does a great job of writing down the bio.