Anjali was made the Editor of the Daksha Times, an online magazine, which is in its second edition. It's a wonderful initiative by the Daksha management. Anjali was more than happy to take up the assignment and started her work in right earnest sometime in August 2019. She started to think through the idea and put out requests on the Notice Board for contributions. I watched her go through the process, of collecting, collating, editing and putting the magazine together and it's quite nice to see the online magazine out today. It's pretty comprehensive at 205 pages. 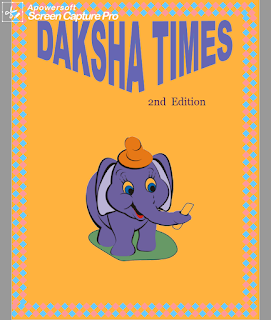 The magazine started with Kipling's 'If'. Notes from the Principal and the Editor giving an overview of what to expect and he general activities during the year. This year they had a House system for the first time (Red, Blue, Yellow and Green),, Student Council Elections where candidates canvassed with their manifestos and got elected as Head Girl - Kashish, and Head Boy - Rohan Sai, Vice Head Girl - Sirisha and Vice Head Boy - Kaniyan, James as Sports Captain and Rohan C as Vice Sports Captain. The Houses were led by captains - Rishika for Blue, Achi Reddy for Green, Deepesh for Red and Sankeerth for Yellow. Red House apparently won the overall shield. All the elected parties wrote about their plans and aspirations for the year ahead.

Anjali interviewed the Head Boy and Head Girl on their vision, roles and responsibilities and then began the magazine sections. The first was Literature and there were as many as 14 stories and essays from the students. Some very interesting stuff too - aliens, treasure, magic, detective thrillers, and an essay on cricket. Then came the Poetry section with six poems from budding poets. A section was dedicated to the Photography section and we saw Deepesh and Divya contributing to it with pictures of landscapes and nature. In the popular Art section, there were as many as 77 pictures if my count is right - colourful and some of them quite striking. A long pencil toon story by Abhiram who wrote the story and Arjun who illustrated it was quite interesting. Then the Telugu section with a few stories.

Small write-ups about the major events and a mention of the year's major academic achievement to Rohan Sai and the delightful magazine ended.  Well, whichever way I look at it, its quite a feat. Anjali's effort was completely her own - though I offered to help he never took it - not a word. Collecting, editing, designing, placing - the idea of adding quotes to sections, of adding illustrations to make the stories and essays more interesting - everything was her own  in consultation with her teachers, Sarita and her Principal Anita. At no stage was she pushing me to read it too - I read it only after the school sent me a link today.

Commendable effort Editor! I looked hard to find errors, spellos and didn't find any. None that my eye could catch anyway. I have asked Anjali to grant me an interview tomorrow about the process and it might happen soon. Meanwhile, good job Team Daksha and its editorial team. With a special word for the Editor!

Posted by Harimohan at 9:51 PM