I reached Sholapur pretty soon and found the way out without going into the city. Thought I would stop somewhere for a bite and checked with Tanhai who was hanging about quietly. Tanhai has now become a bit more adventurous and she opted for a roti, dal fry and anda bhurji stop at some small dhaba. I had picked up a few guavas so I did not feel very hungry until I was closer to Pune but when I saw the perfect dhaba I stopped. I realised he also made the perfect roti, dal fry and anda bhurji.

While chatting with him I asked about Bhuleshwar temple, an 8th century Shiva temple, and he said it was not too far from there and it was worth a visit. I checked the wikipedia, my favorite source for quick information, and found that it was both a n 8th century and a 1200 AD temple. One said it was built by Krishnadevaraya. Also it is declared a protected monument and supposedly has some exquisite carvings. 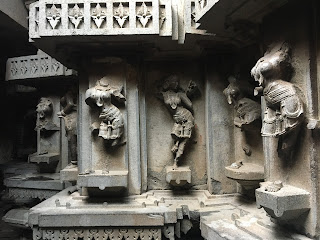 I put the maps on Bhuleshwar and Tanhai and I were happy to see a beautiful road veer off into some wonderful green fields on either side. Fields of chrysanthemum showed up, probably for commercial use. The temple could be seen at a distance but I realised that we had to climb a ghat to get there. At the top of the ghat, the road going to Saswad, we headed off a narrow road which led to the temple.

There were a few visitors there and Tanhai and I walked around the temple wondering where the entrance was. A dog wandered in and out and so did a cat. Then we found that the temple had some activity - there was a priest and some puja activity going on. There were some instructions not to take pictures but everyone was - perhaps that was to do with the deity only I thought. I got some pictures. I bumped into this person who seemed to know about the temple history - he said this was very old, as was proven by the figure of a Ganesha in a female form. Another story about the  temple is that if you offer doodh pedhas to the deity some of them go missing by the next morning.

The carvings were intricate. The place had some serious presence. I prayed to the deity, headed out, took some pics of the bell and the environment and then made my way back. This had been a worthwhile detour. Tanhai seemed to agree. And if Tanhai is happy, we are happy! Off to Pune then!

Posted by Harimohan at 3:16 PM No comments:

Gol Gumbaz must be visited at 6-615 am. If you can get your hands on Ramesh, a certified and qualified guide and one of the oldest guides out there. You submit to him and he will show you what the Gol Gumbaz is about. For starters it is the mausoleum of Mohammed Adil Shah, was designed by the famed architect Mallik Sandal. It was constructed between 1626-1656 and looks like nothing on earth will shake it. It looms over the town.

Here are some pictures.

As we entered the parking lot, me and Tanhai (I think I better introduce my partner on this artist date, my solitude), this superb dawn showed up. We realised that the Gol Gumbaz area is a bit like KBR here, a well known walking spot with lots of well maintained paths around it. Lots of people huffing and puffing. But there was no one at the ticket counter and we waited until a man with namam came over and handed over the ticket. While this was going on a dignified and unobtrusive man came and introduced himself as Ramesh and he could guide us for Rs. 400. Tanhai had no problem so off we went. 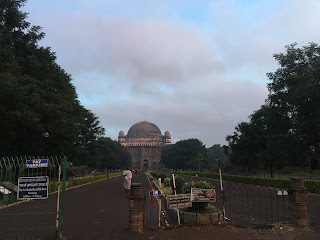 What you see is not what you always get as you can see from the pictures above. Ramesh explained that the first sight of GolGumbaz is misleading - the dome belongs to the Gol Gumbaz while the structure before it is a different building. Of course he said that as we go closer the gumbaz dips, like the sun in the west. So it did. Me and Tanhai nodded in appreciation.
Ramesh was not happy with me dilly dallying around and insisted that it was most important that we head straight to the Gol Gumbaz without further delay and before it becomes a madhouse. though i rebelled a bit I found that Tanhai seemed to favour Ramesh so I tagged along. We had to leave our footwear outside with a cynical looking old man and his dog - one of them adopted the other. And then Ramesh took us into the mausoleum. What a magnificent structure!
The four pillars around the Gol Gumbaz house staircases. As in Golconda where it is almost impossible to find the entrance to go to the top, so are these entrances. You almost slide into them and then the steep climb up seven stories begins. Tanhai said that she might not have climbed all these stairs by herself and might have been content to gaze at the tombs below but was glad she came along. An artist date is an artist date after all. I huffed and puffed a bit and Ramesh egged me on, worried that others might get there too.

We climbed the stairs and stopped at the landings from where we have spectacular views.
Once we reached the top Ramesh quickly hustled me and Tanhai into the dome and it was awe inspiring to see the structure without any support form pillars. The design of petals that adorns the dome has a few open petals to let in light and air as is evident in the pic below. Ramesh walked across after he found out my name and then began an exhibition of some of the greatest acoustic effects I have ever witnessed. He would whisper from across the dome, some 75 metres away 'Hari sir...I am scratching the bottle' and I could hear him so clearly behind my ear. He dropped a coin, sang a song, whispered sweet nothings and it was beautiful and spell binding. He said the Sultan and his wives would be seated opposite to one another and provision was made that what the Sultan whispered to one, could not be heard by another. (Maybe he whispered the same things to all of them, a common trick I used in my hey day).
The parapet wall inside the dome is very small and I did not dare to step closer as Ramesh warned me saying that some selfie takers had descended rather quickly from the top and I dd not want to meet my maker or the hard basalt below and stayed away. It's a bit risky. But the acoustics was simply the best. I'll try and locate the video file i have of that. By now some young people had found their way up and they did what they were trained to do when you see a quiet and silent place - clap, whistle and make 'Woo' sounds. We left them and headed out where Ramesh took a couple of pictures of me and that was it. He bid good bye, leaving me and Tanhai alone. Tanhai wandered off to the turrets while I gazed at the town. 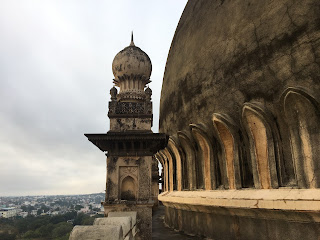 If there is one thing you need to see - it's this Gol Gumbaz and then the Ibrahim Rauza. Bijapur is well worth the trip for anyone who's within 8 hours of it. I am so glad I made the trip. Headed back, some breakfast, music in the car and off I am with Bryan dams singing 'Run to you'. The weather's lovely and I am good for a nice, chilled out road trip to Pune now - about 350 kms. Maybe I have time to see something else on the way.
Posted by Harimohan at 10:02 PM No comments:

Gol Gumbaz looms over the Bijapur town and its size and shape are so impressive that it hits you like nothing else even as you are approaching the town on the highway. From Naldurg to Sholapur and then to Bijapur through Sholapur's traffic and then on to the highway (most part brilliant) and it took about 2 and a half hours.

I thought I'd head straight to Gol Gumbaz and head off the next day after some quick sight seeing. I went in to park and as I got off a middle aged chap came to me - looking  very parking lot officialish. I thought he wanted me to park someplace else but he was like -if you go in now its like a mad house- go tomorrow at 6 in the morning'. There were a lot of people so I wondered about his advice. 6 is a great time to check out these monuments so I cross checked with another person and he confirmed it. Then this guy says - in two hours I will show you 10-12 sights on my ghoda gaadi for 1000 bucks. It looked like a crazy enough offer so I said, let's go. And off we went. This chap's name was Murtuz, his friend  Hashim joined us, and the beautiful black horse was Arjun. Off we went feeling like we were back in Sholay times.

First to the impressive Masjid. Then the Mahal. Then the huge stage. Then the Jod gummat. Then the Ibrahim Rauza. Then the cannon. Then the watch tower. Then the Lakshmi temple. It was already a couple of hours and I was tired so I decided to pass the others.

Jamia Masjid  - Built by Adil Shah after the victory at Talikota, it is one of the first mosques built in India. Massive. Accommodates 5000 people he said. One entrance made made by Aurangazeb. 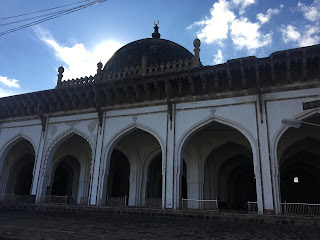 Off we went then, through the narrow and dirty lanes of Bijapur in the ghoda ghadi, as they expertly managed to not hit anyone or trample anyone. I saw many old houses.
Mehtar Mahal - Built in 1620 it is considered an architectural marvel. It was the home of another nobleman as I gathered.

Gagan Mahal - I am not sure if this was Gagan Mahal but it sure looks like it. It's a beautiful spot, lush lawns, people sitting around. Lovely. 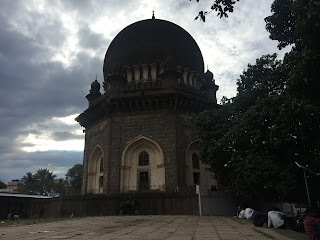 Ibraim Rauza - The Taj of the Deccan, the tombs of Ibrahim Adil Shah and his wife Taj Sultana. Architect Mallik Sandal. The structure on the left is the tomb - Ibrahim Rauza and the structure on the right is the mosque. Exquisite. 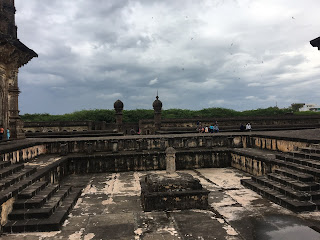 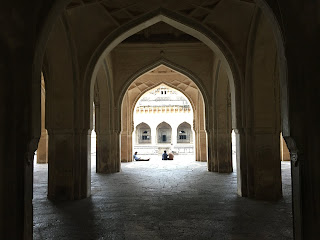 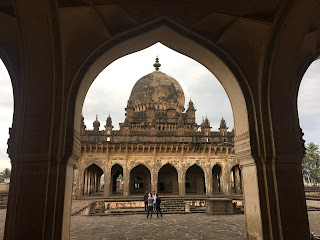 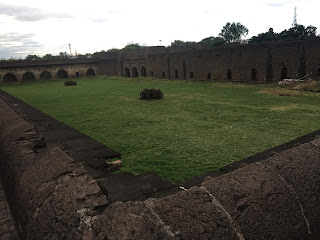 Malik e Maidan - There is a huge,  huge cannon which they said was brought from Ahmed Nagar as dowry when Chand Bibi was married into the Bijapur Sultanate.
Upili Burj - Watch Tower. Has some two flights of steps from where you get beautiful views of the city.
Some more quaint houses on the way, a Lakshmi temple etc. Ghoda gaadi charges 1000 bucks (can negotiate surely). Guide took another 400 but need not have paid since he simply tagged along. Anyway the duo was entertaining so I was happy. I didn't see 12, only 7 but that was OK.
Posted by Harimohan at 9:03 PM 1 comment: