After watching a 1969 thriller 'Ittfaq' last night, woke up to a lazy day. I found that our maid Lakshmi is dying to get back to work. She comes to sweep the leaves off the front yard everyday and heads off but today she asked if she could get back to normal work (like other maids who are all back to work). I wonder if she is getting bored of sitting at home or missing work. She lives in a room in an apartment block close by and it was the apartment walas who had scared her when she was working during the initial days of lockdown. Yesterday, they prevented her sister who lives next door when she went to visit her, from coming in. 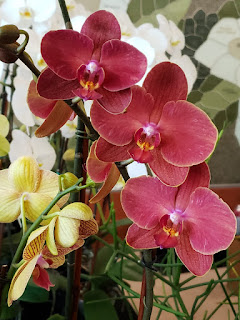 While we were wondering what to do with her strange request, Anjali put it to rest with an unequivocal NO. 'No,' she said. 'She is not supposed to work. It's not safe for her.' Wow. That was the clarity we needed and off went Lakshmi. I liked that Anjali always had Lakshmi's perspective in mind, not merely ours.

Among the messages I received today was a picture that Vijay Lokapally forwarded- a young girl with three packets of meals. It came with a caption 'Her face haunted me all of yesterday'. I was intrigued because this was a forwarded message. So I asked Vijay who the young girl was. He told me it was a picture clicked by a friend of his. I asked if I could speak with his friend.
His friend told me she has been distributing cooked meals and ration to migrant or homeless people in Delhi. Apparently, there's something called the Civil Defence Committee under the Ministry of Home Affairs which allows volunteers to organise and distribute cooked meals or ration (specific guidelines - rice, atta, oil, dal, salt etc) There's a network of volunteers who get the stuff through a wholesaler at reasonable rates and distribute the food in shelter camps. The photo is that of a girl at the shelter camp - obviously hungry, uncertain and grateful at the same time. That was the look that haunted her. It's a look all of us are familiar with - at some point or the other we have felt that same feeling.

Vijay's friend told me how she would like to follow the way of the Germans where they keep stuff they want to share on a wall and those who need it take it away. She also told me how she had started giving her vegetable vendor a cup of tea, knowing he starts his day at 4 am to get vegetables, and how grateful he was when offered chai. In a few days, he was getting more chai from others. 'Once we start others pick up,' she said. I said I would give my vegetable vendor some of my famous chai tomorrow.
She told me another interesting story - of a one-armed rickshaw puller near her house who makes his living by pulling his cycle rickshaw. A schoolkid, a banker and a couple more regulars provide him his monthly livelihood. Our friend never used his services though she knew him well, primarily because she did not subscribe to sitting on a rickshaw when another human pulled it. But knowing his plight she got his bank details and sent some money into his Jan Dhan account to tide over these days. A few more people sent money to him and when she next met him, he had some extra money, which she hoped he could use to buy an artificial arm. But he said, 'I know people take pity on me and send me money or take care of me. But what about my friends who are normal on whom no one takes pity. I'll spend this money on them for their needs during the lockdown.'

You don't need money to have a big heart.
Another trip out to get some groceries from Ratnadeep for me - a wait of 25 minutes outside. Most stuff is available. Not as much rush. The boy at the counter told me that the place had lines even before they opened at 7 am in the morning but between 230 and 4 in the afternoon when it's hot, the crowd's thinned. He offered to put stuff aside if I called or tell me the situation. Nice.

Online class with the University students. Meditation. And the day ground to a hot end.
Posted by Harimohan at 9:29 PM