It was ABBA The Movie that I saw in Tivoli in 1979 that started off my cultural revolution as far as western music goes. It turned my world upside down and I consumed all sorts of western pop after that. I fell in love with Anni Frid and thought Agnetha was a little too forward in the way she wiggled her bottom at nice boys like me. I was glad Benny and Anni Frid were together because I wasn't too fond of Bjorn. Then I bought so many tapes of ABBA and know many songs by heart. 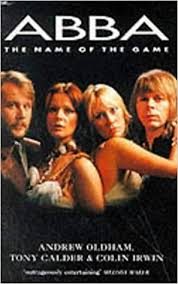 So when I saw this book in the second-hand market I could not not buy it and got down to reading it. Agnetha was a star already when she met Bjorn, her father being a musician etc. Bjorn was ain a group called Hootenanny Singers and Benny was in a group called Hep Stars. Anni Frid had a solo thing going, after a tough childhood when her mother died very young and her father, a German soldier, never came back for her. It was Bjorn and Benny who gelled together and became thick and their girlfriends Agnetha and Anni Frid supporting them initially before they became one group thanks to their manager Stig Anderson who believed in them more than they did themselves.

Agnetha and Anni Frid never got along. Agnetha was always scared of flying and couldn't handle success as well and wanted to go home to a husband and her children. Anni Frid loved her fame. Agnetha became a rage for her bottom which was considered the best bum in the world. Their wardrobe and stage performances were terrible. Benny was great at composing and Bjorn at songwriting. Their first major international win was the Eurovision where they won the contest with 'Waterloo'. Their tour to Australia was a grand success.

Anni Frid had two children from a previous marriage when she met Benny and married I'm. Bjorn and Agnetha married. Both couples divorced - Benny remarried a TV presenter and so did Bjorn. Agnetha married and got into several affairs. Anni Frid pulled out and went to England, married some kind of an aristocrat and lives in comfort in Switzerland (I think). The group broke up and Anni Frid took her share and left; while the others and Stig got stuck in some tax issues which they finally sorted out but they all split by then. Anyway, they had enough to retire.

It's an interesting story to see how an unlikely group actually became a rage and lasted for years and continues to last even today. There are as many covers of their songs coming out even now, movies being made and so on. For me though, ABBA will always remain the ones who changed my life in one direction - for the better. Vivid memories of listening to 'Super Trouper' at Nareshs'at house when the album came out, our own cassettes at home, a dedicated ABBA evening at Parth's house remain. Time for an ABBA evening.
Posted by Harimohan at 9:57 PM