Vikas Bahl's movie based on Anand Kumar's life about a poor student who fails to go to Cambridge because of lack of funds and who takes up teaching poor students free of charge and train them fro the IITs. The real-life Anand Kumar selects only 30 in each batch, hence the name, Super 30. Of 481 or so that he has trained free of cost, since 2002, 431 or so have made it to the IITs. It's a fantastic story, and he and his brother have since survived many attempts on their lives. His school was recognised as Asia's best. The movie is highly watchable. Good to see Hritik doing different roles. 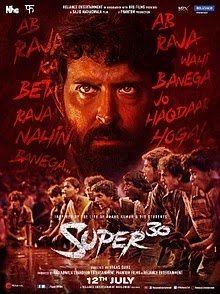 Posted by Harimohan at 2:58 PM