1979. Gautam Ghose directed the Telugu film set in pre-Independence Telangana when the Nizam's doras were given complete control over their jagirs. The doras troubled the peasants no end, inflicting all sorts of indignities on them and their women, The peasants fight back. They gain some ground and after independence, they feel they will get justice. But the doras who ran away return, now as elected representatives, and the struggle goes on.

It's a must-watch if you want to know the Telangana story. Things haven't changed much since then. 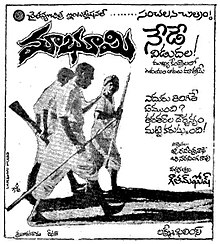