1977 Girish Kasaravalli's movie based on UR Anantamurthy's novella is about the ritual of ex-communication. A young boy joins a Vedic school which is struggling for finances. The Vedic school teacher goes to raise funds leaving the school in the hands of his widowed daughter and another teacher. The students turn unruly and soon it is known that the widowed daughter is pregnant from an affair with the school teacher. As the entire society bays for the young woman's ex-communication, it is only the young boy who stands for her and supports her until her father comes and performs her final rites and leaves her with a shaven head by a banyan tree outside the village. The harshness of these rituals, the utter lack of compassion for humans who make mistakes,  even the one scene where the untouchable is shown, is a mirror to the society that's shown. The young boy and his relationship with his Yamunakka was shown beautifully, reminded me of 'Bicycle Thief'. Surprisingly the actor who played Yamunakka never acted in another movie after this one. 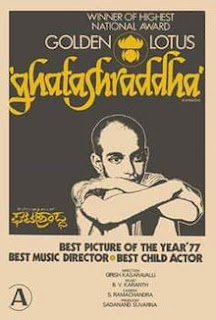 Posted by Harimohan at 3:04 PM