Finally got this 1960 classic out of the way. Ever since I saw the movie 'Trumbo' - about Dalton Trumbo, a celebrated screenwriter who was put out of work in the infamous  McCarthy era where all supposed Communists were seen suspiciously and harassed. Trumbo wrote under other\people's names and they won awards for 'Roman Holiday'. 'Spartacus' was another of his great screenplays. 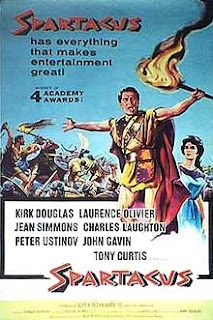 Martin Sheen plays Spartacus, a rebel slave turned gladiator who leads a slave rebellion and escape, from the Romans. Grand scale. If you're in the mood to watch 'Benhur' type films this is one.
Posted by Harimohan at 10:21 PM