After watching MS Sathyu's classic 'Garam Hawa' last night I was woken up by the unusual sound of the calling bell ringing. At the door, I found the thin Muslim man who sells roasted corn every season. He is just a very nice guy and I worry for him sometimes - if I buy four of five - he gives me one free.

Today was the go-to-Polimera-and-buy-fruits-day. So I headed straight there.
The chirpy security guard who talks to me every time came over with the sanitiser and plastic gloves and told me that since the lockdown was being relaxed he wanted to go home. 'It's been four months now,' he said. Can't be older than 19 or 20. I asked him where he lived and he said Osmanabad, which is on the Mumbai-Hyd highway. 'Everything is normal in my town,' he said. 'All shops are open.' I told him he should go. 'I'll go for a week,' he said. 'There are trains and buses to my town.'. Lucky him. I hope he goes and stays safe.

...
While I was getting off the car at Polimera I spotted a family - an old lady, a younger lady and two small children. They asked me for some money and I gave them some. When i left Polimera I saw another small kid, cannot be more than six or seven, dash across the road to me. 'You gave them money,' he said. 'You give me also.' I asked him what he wanted, money or food. 'Money,' he said, looking this mother, who was nursing a small child in the shade. 'How much do you want?' I asked. 'Ten rupees,' he said without blinking. 'Do you want more?' I asked.

'No,' he said. 'Only ten.' He took his ten rupees and ran away across the road.
...
At the medical shop I found two dogs practising social distancing. 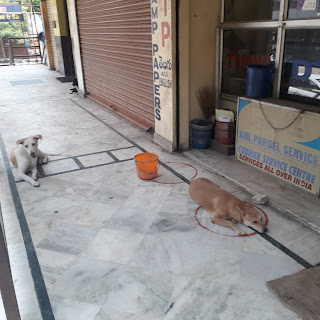 ...
While driving back home I saw a couple of near misses - accidents. One bike guy just swerved out of the U turn in front of a van and just about missed getting hit. Another bike almost ran into a stationary garbage truck. I figure that people are still in lockdown mode and not getting that traffic is increasing on the road. Go to be careful fellows.
Posted by Harimohan at 9:14 PM