Vishal Bharadwaj's 2003 adaptation of Macbeth did not make much sense when I viewed it the first time. For some reason, most of Shakespeare's stories fail to register in my mind clearly, so perhaps that added to the confusion. But yesterday, in remembrance of Irrfan Khan, when we watched the movie, it made sense. Pankaj Kapoor as King Duncan, Irrfan as Macbeth the general who is goaded by Lady Macbeth (here, she is the King's wife) to murder the King and become the King. The witches, here played by two corrupt cops, Naseeruddin Shah and Om Puri, tell Maqbool (Macbeth) that he will become king soon. They also predict his downfall which comes true despite vague conditions which Maqbool believes will never come true. The key element is the guilt they face after killing the King, seeing blood everywhere, even when it is not there. The last scene shows Irrfan dying, closing his eyes peacefully. A sigh escapes you. 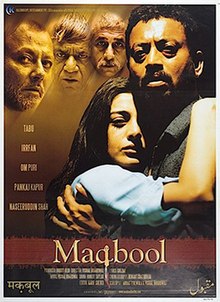