Robert Wolff is a psychologist who spent much time living and working with ancient civilisations in South America, Indonesia, Malaysia and tried to understand their way of living and knowing, their natural wisdom. It is a fascinating account of his experiences, mostly with the Malaysian tribe Sng,oi, a nomadic aboriginal tribe that is cut off form the rest of the world. They have no phones, no schedules, they feel they are part of all things living and non-living and have an acute sense of energies, emotions and intentions. 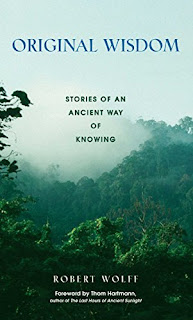 The tribe is difficult to access as they live deep in the woods and keep moving. Villages are small with about fifty members or less in each village.  His first experience with one of the tribes happens when he is sent to conduct a survey on their nutritional needs and methods. He finds a woman in great discomfort, and somehow convinces everyone to move her to a hospital and they do. Only later does her sister in law tell him that she was being taken care of at home, with her people around her, but he had moved her into an impersonal space where she might die all alone. Worse, she might not even get buried according to their customs because of his actions. Wolff realises that science may not always be the answer, however advanced. In another experiment he asks children to draw - a classic way to understand their minds - and finds that they cannot draw anything because they have no references set in their community. It's like a blank paper.

Wolff finds that these tribes people speak very gently, softly. To speak loudly is to be rude. They have their own system of living, everyone sharing all resources, not having institutions like marriage, education coming through experiential and tuned in knowledge. The medicine men or bomoh were people who would come, hold their hands, gently question and arrive at what the problem was and treat it - they were expected to know and they would never ask the patient what the problem was. All this was done for free. Their special delicacy was monkey, they'd eat roots, only as much as they want, throughout the day and keep the rest for someone else who might wander that side. They would sit for hours doing nothing, not being contaminated by the concept of time.

Wolff learns their language and they accept him as part of them. He is amazed to find that each time he tries to meet a new group, one person in the group would be waiting as if to meet him and take him to their village. They believe that this is not the real world, it is a world of illusion, of shadows, and only when we see past the veil can we experience the real world. They in fact are so humble, they call themselves slaves.

Once he takes the bomoh of a village to the main town with him and he sees the ocean for the first time. Wolff notices the bomoh watching the ocean intently the next day and after they return to the village, he holds a meeting and tells the rest of the village people about the ocean - details about how the ocean covers the land but not enough to pose danger, of how there's life inside the ocean, geography of the ocean and so much more that Wolff knows could not be known by merely watching the ocean from a distance. But the bomoh has seen an ocean for the first time and Wolff realises that there is a knowing in the universe if we are tuned into it. He asks the bomoh to teach him and he asks Wolff to join him on a walk - and they walk and walk in nature for days without any instruction and after many such, Wolff realises how to tune into the universe and its wisdom.

Another powerful realisation is when one of them actually invents a machine - but it is not put to use. They do not see any use for machines because they know that the machine will take the work of 100 people and their question is - what will the 100 people do then? Like we are now wallowing in more and more time to fill ourselves with distractions from the real world. They believe in taking care of each other - something we have lost a bit.

There are so many wonderful ideas and experiences described in this slim and easy to read book and I described only what I remember. But it is a worthy read, one that will make you think about the way we have allowed our minds to control us, and have lost our connection with our selves, our intuitive selves that know.

Posted by Harimohan at 3:45 PM