Joshua Foer was a journalist covering memory championships in New York when he met a young British Memory Grandmaster Ed Cooke. Ed tells Joshua that it is all technique and they all have average memories. He tells him that with some coaching and practicing the right technique Joshua could be competing in the USA Memory Championships the coming year. Joshua finds it interesting and during the course of the year meets many interesting people - Ben Pridmore, Anders Ericsson of the expertise fame, some savants, people who have no memory, people who cannot forget anything, and over a year trains to participate in the US Memory Championships. It's a tale worth reading about. 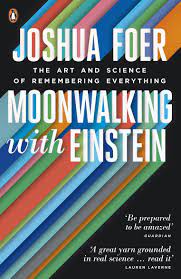 Joshua starts with how the Greek poet Simonides, who was inside a banquet hall speaking steps out for a few minutes when it comes crashing down. Simonides recollects the exact place where the diners sat and helps their relatives find them in the debris. This is where the art of memory was born he says. He talks of Plato and Aristotle, the Greek book on memory and how they would try and memorise a lot through techniques. He talks of something called a Memory Palace which is a fundamental technique to memorise where you take a list, imagine a place you are very familiar with, create a telling image of whatever is on the list (the lewder, shockinger the better to recolelct) and once the image is formed, assign a place to it. So if I have a list of 10 items long, I conjure up and image for the first item, let's say Amul cheese (image of Raveena Tandon singing 'Tu Cheez badi hai mast mast..' clad in cheese - powerful enough) and place it atthe gate as I enter my house. Similarly I conjure up an image for bread,  corn flakes etc and assign them positions as I go along. Longer the list, bigger the palace you must conjure up. I tried this and it works. The other memory techniques need more practice and some coaching.

But the tales of people like S, who cannot forget anything he has heard or read because he instantly sees everything in some image and can remember word to word, or another gentleman who has lost all memory, save the present moment thanks to a virus that ate away the current memory part of the brain, the tales of savants with special gifts like Kim and Daniel, makes for fascinating reading.

For the record Joshua make it to the finals, sets a US record in card memory, goes to the World Memory Championships and secures 13th place and gets admitted to the KL7 an elite club of mental athletes (entry needs them to drink two beers, memorise 49 random numbers and kiss three women in 5 minutes). Joshua figured enough was enough, came back and wrote this brilliant book. Wonderful read.

Oh, and as for the title, its an image he conjured up for memorising a card - Miachel Jackson moonwalking was one part and Einstein was another so they naturally combined to become the title.

Posted by Harimohan at 7:18 PM