I was chatting with Anjali yesterday while we were doing one of our "chatty-catching up" walks.

'It's incredible isn't it?' I said. 'You were talking about getting yourself a dog for a while now and even got a date on your mind - June 2021. And when I asked you a couple of months ago what you were planning to do about it you told me that you were not thinking anything but that the dog will appear in the right way if it was meant to be. And now look.'

After she made that dramatic statement was when I noticed Akela laying her litter in our compound. Anjali approached the whole affair very sensitively - giving it food from afar, making it secure, finally coming to a stage when Akela would let her touch it. Then as the pups grew enough to walk around she would pick them up, feed them. Then she gave them all names - Kroor, Zindagi, Sona and Zor. And then except for Zindagi, the others went missing.Two days later they returned - minus Kroor. Then the dog pound fellows came around and once again all the dogs were missing. Then Zor was not allowed in by Akela and spent a traumatic night with us. Then Akela got injured and still hobbles about - and Anjali who has never seen blood in such quantities before actually got her a volunteer to help nurse Akela. 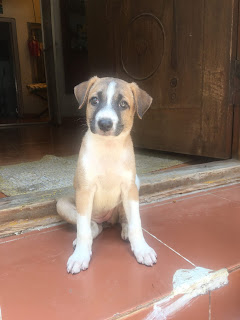 The pups are so playful now - at that age when they are incredibly cute. They can't wait to get into the house, can't wait to climb into their mistress's lap. A full 45 days. almost the entire summer vacation we have had these pups and the mother.

We could not have planned it better - this initiation. It's incredible how things happen when we let go of our attachment to outcomes.

Anjali agreed. And then I asked her again. Now what? 'I am not thinking anything,' she smiled.

Open to all possibilities.

Posted by Harimohan at 5:14 PM