Anjali - The Amazing Ways of the World

I was wondering why this new dog had turned up at our house and decided to spend its last few hours (or so I thought) there. The poor little dog was suffering from some infection, so bad, that it could not get up, or even move a bit on its own. Clearly it was in its last hours. 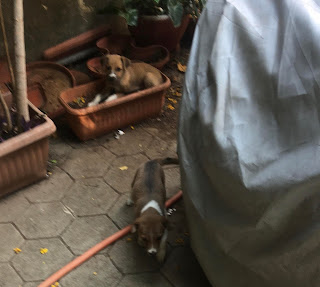 That's when Shobha called the People For Animals people and they came to take it away and treat it etc - though they did not have much hope considering its condition. They also saw the pups and promised to come the next day and give them some deworming syrups and rabies vaccinations.

And they came yesterday and amidst much protesting by Akela who suspected some foul play though she was reassured by Anjali's presence - the three pups got their shots. Sona went first, held by Anjali as they gave it the syrup and injection and it bore it soundlessly. Zindagi went next and despite its naughty demeanour it yelped quite a bit when she got the jab. Zor is always the one who cries at the smallest provocation so she yelped away to glory. They all got some good food as a reward from their mistress after the vaccination.

Later in the day we got a call from the PFA people conveying the sad news that the dog with the infection had died. It was a sombre moment for this unknown dog that chose to come to our house and die. And thn it struck me, that if it had not been for that dog, we would not ave got the PFA people, and in turn they would not have vaccinated the pups. Its almost as if that dog came to give life to these pups.

It's amazing really - the ways of the world. I think I will never cease to be amazed by it.

Posted by Harimohan at 9:47 PM