This morning we woke up to loud yelps like someone is murdering one of the pups and sounds of war between grown dogs and excited and traumatised pups. I was slow to react but Anjali was out of her bed in a trice and so was Shobhs. The dogs surely are in good hands. 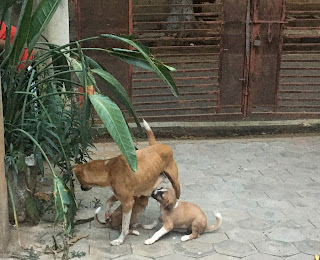 In minutes Anjali found that this one mean, little dog that looks like a jackal (a proper villain type) slunk in and attacked the pups. Akela fought him off and Anjali fearlessly shooed him off. The neighbours who have been watching Anjali and her dogs pointed out where the offender ran off to. Another uncle gave her some thumbs up. All in all, a major traumatic incident passed and everyone started breathing again.

But it looks like Anjali's story with Akela and her pups has its share of followers in the colony. And of course, from within the safe confines of our house.

Posted by Harimohan at 9:27 PM