1971. Satyajit Ray's first one in the Calcutta trilogy. This was based on a try by Mani Shanker Mukherjee and delves into the power struggle in corporate life in Calcutta. A rapidly rising Indian executive in an MNC finds himself compromising on many fronts to reach the highest rung in the company - a change that his idealistic sister-in-law does not like. However, his wife does like the good life and so does he, so there seems to be no problem. Another good look at Calcutta of those days. What strikes me is how well they all spoke their English, perhaps a rub off of the British, nice and clipped tones. The film has Barun Chanda (who later wrote several thriller novels) and Sharmila Tagore (sister-in-law) in the lead. 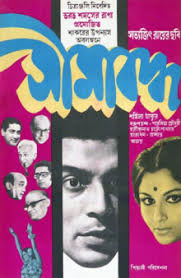 Posted by Harimohan at 9:41 PM

A good overview of the movie. As a 2k kid reading about 90's music is really interesting for me. I really love the way which you write the blog and express your memories. very nice. Thank you so much you read my blog. Your blog will always have my support.

Did you like my poems in narayanapillai.blogspot.com
I will be very happy if you read and give me suggestions as a writer
thankyou!