1990. Satyajit Ray. Adapted from Henrik Ibsen's play 'Enemy of the State'. Relevant even today. A man of science, a doctor, makes a creation between illnesses and deaths due to water contamination. He finds that the water in a densely populated area of the town is contaminated and it includes the temple which is visited by thousands every day. He wants to bring it to the public's notice to prevent further deaths by the two administration and the powerful temple trust which makes money off the upcoming festival insist that no illness befalls those who drink holy water. The doctor fights a losing battle and he is branded as an enemy of the people, asked to leave the house, loses his job, and wonders if he had done the right thing by trying to warn the people. 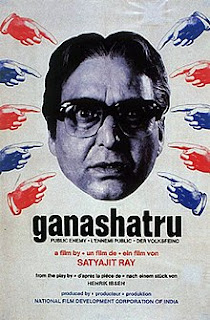