This is the third book by the author that I have read - Mafia Queens of Mumbai and Black Friday being the others. This one pretty much records the history of crime in Bombay and the seesaw battle between the police and the mob. 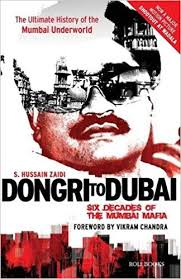 The story goes back to the beginning when Bombay was under British rule and some gangs from Uttar Pradesh would do petty comes like holding up people and robbing them. Then comes an era when a boy comes from Tamil Nadu with his father and slowly figures things out at the docks - a scene straight out of Deewar. But anyway, Deewar was partly based on Haji Mastan's story, so we watch the rise of Haji Mastan as a suave don who does not get his hands dirty but who makes tons of money by smuggling gold. Always wearing white, never into muscleHaji rules the roost for a long time. Sometime then, comes the South Indian don Varadarajan Mudaliar upon whom the movie Nayakan was based. Varadarajan starts from the streets and slowly grows his business by forming a Madrasi cartel. The third angle in this time is the Pathan gang, led by the moneylender Karim Lala, a violent gang who would be used by Haji Mastan to provide him muscle.

Into this unholy turf comes the son of a respected policeman's son, Dawood Ibrahim Kaskar. Much as his father is respected fro his straightforward ways, the family is large with 12 children, and they'd go hungry many times. Dawood begins his escapades in small ways and slowly starts showing that he is not one to be trifled with when he makes a couple of daring heists. He is brought in by the police to play the gangsters, but he outwits everyone and makes his own turf. He sends an established don like Baashu packing, picks up his number two Khalid, and goes about establishing himself. Things sour when after a truce between the Pathans and Dawood, the Pathans, kill Dawood's brother Sabir. This is avenged by Dawood getting one of the Pathan's Amirzada eliminated in the court premises through his friend Bada Rajan who is in turn bumped off in the court premises by the Pathans.

In the ensuing war, many gangsters are made and killed. A Hindu gang comprising of Babu Resham, Rama Nail and Arun Gawliis formed at Dagdi Chawl and the first two are bumped off. At some point Dawood overreaches and after the killing of Samad Khan, escaped to Dubai. The shoot outs at Lokhandwala, JJ Hospital, the making of Chota Rajan Chota Shakeel, Abu Salem, the entry of the mafia into films, the becoming of the world's biggest mafia don are all chronicled in a most entertaining manner. Someone must be on the job surely to make a Godfather-like movie, if not in Bollywood, in Hollywood.

I enjoyed reading it and I think I have a much better understanding of how the mafia grew and how it worked.
Posted by Harimohan at 12:08 AM