1971. Bengali. Satyajit Ray. Dhritiman Chatterjee's debut film. It shows the helplessness of a student who is intelligent but has no opportunities by way of employment, nor has the drive to venture out on his own. He applies for jobs, watches helplessly as his friends either join the communists or waste away. It's an era of helplessness and he finally compromises by taking a job far away from Calcutta, accepting his defeat. It is also a commentary on how middle-class India brings up its children with notions of honesty and honour and pride which limit them. 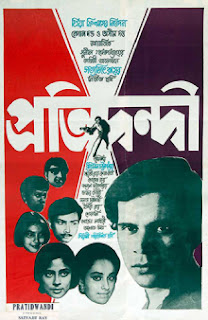 Posted by Harimohan at 6:36 PM

You have given a good overview of the movie. Can u visit my site if u can Narayanapillai.blogspot.com