1977. Satire made on Indira Gandhi and the Emergency which was immediately banned and the prints seized by Indira Gandhi's government. I heard so much about it then so decided to check it out. 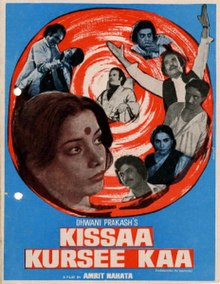 It is about a functional country called JanGan which is led by two political parties - Neela and Peela parties. Enter an idealist Meera who says that the entire system can be manipulated and anyone can be made the leader. She moots for change and is supported by many young idealists including her boyfriend. They pick a man off the streets, Gangu, and manipulate him into becoming the President. Their motto - garibi hatao. Gangu learns the tricks of his trade from his secretary Deshpal who looks suspiciously like RK Dhawan. Of course, there is the Janta of the country represented by a mute Shabana who is always taken for a ride.

Gangu finds an issue - rats. He decides that the country must eliminate rats and makes a deal with a foreigner for 20000 dollars. In return they export cats from Jan Gan for 10000 dollars. actually nothing happens and only money changes hands and gone into Swiss accounts. The government then announces a scheme offering a reward to catch rats to the public - every rat will be paid 10 bucks. people come, bribe the officials, get a certificate that they caught rats and get paid. everyone is happy until Janta lands up with five dead rats she has caught. They ask her many questions and ask her to bring proof that she caught the rats. There will be an enquiry.

In the end, almost everyone dies including Gangu. Almost everything in the movie is relatable even today. Shabana Azmi, Manohar Singh, Raj Kiran.
Posted by Harimohan at 5:56 PM