1981. Mrinal Sen. A young man meets the editor of a newspaper who asks him to write a piece set in his lower-class milieu. The young man cannot find anything interesting enough though he tries hard. The theme of smoke rising from coal-fired stoves in their kitchens pervades his existence and in the end, he can only dream of his class rising up in revolt against the upper classes. But when he wakes up, and gets the job, he finds that his ideas of revolt are compromised. He gets a gas connection for his mother. 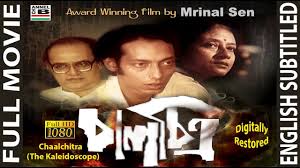