It's probably the first time I have read Anita Desai's work. A collection of short stories. Royalty is about a guest, an old friend, who is rather insensitive to the needs of his old friends. Winerscape is ab unusual story of an Indian settled in Canada and who invites his two mothers to visit him when his Canadian wife has a child. 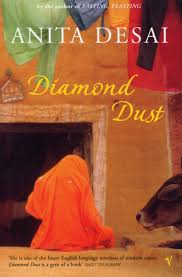 Diamond Dust is about the love of a senior government official for his dog - Diamond. The Man who Saw Himself Drown is about a man who finds that he has been mistaken for dead but does not know what to do with this new found freedom. The Artist's Life is the story of a reclusive woman - an artist. Five Hour to Simla is about a car journey to Simla which takes longer than they expect. The Rooftop Dwellers is about a young working woman and her new home in Delhi - a barsati, and her struggles to get by.

Nice stories. She is considered one of the finest English novelists of modern times.
Posted by Harimohan at 1:27 AM