1957. V Shantaram. Winner of the Golden Bear and the Golden Globe award. An idealistic jail warden gets permission to run an open jail with 6 chosen convicts to see if the circumstances will reform them. All six are murderers and the warden risks his very life to live in an open house with them. They farm and begin to make a living and slowly start respecting the good-hearted warden. They find his two watchful eyes full of love and caring for them.

A toy seller who passes their house every day provides an outside, female perspective. They run away, plan to murder him, get drunk and even try to molest the toy seller but in the end, they reform. Never before did the song 'Ae maalik tere bandhe hum,' sound better than in the movie. 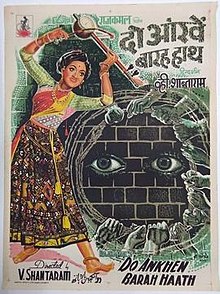 From the first scene, it gets off like a shot until a dramatic end. Highly watchable. Also part of the 100 all-time great Indian movies to watch list I have been ticking off.

Posted by Harimohan at 4:25 PM