Mix Tape completes my reading of all of Vrinda's three books. I enjoyed reading this as much as I did the others though I noticed a change in texture and structure. 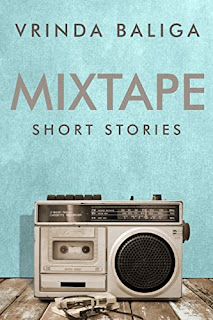 Mix Tape is the first story about a young kid who makes mix tapes for the engineering college students and how he forges a friendship with one fresher which leads to a happy ending later. 'The Stories We Tell' is about two daughters trying to come to terms with the fact that their father has found another person to live with in his old age. 'Girls and Boys' is about the difference between boys and girls - and a rather unpleasant memory - and how they deal with unpleasantness. 'Heavenly Abode' is about a resort owned by this couple, that specialises in aromatic pillows, and she uses one such to get back at her husband. 'Broken' is about an artist who discovers that his best work comes only when he loses something he cherishes the most - and when he is losing his touch - realises that the one he cherishes is his wife. 'The Beached Whale's is about a whale that is out of water and a man who is out of his depth in the city. 'Kings and Sons' is about a queensmaid who talks about how her son is now the king. 'The City' is about a city that left a harsh impression on the narrator. 'Roots' is about a civilization envisaged on trees. 'Forgotten' is so heavy on science I gave up.

As always, well researched, well structured, characters that are so real you can pinch them, and a variety of emotional width that astounds you. I loved the cover, the title. Well done Vrinda. Looking out for your next collection.