Another classic that I found in Pune, this one is a booklet written by a school principal from Moscow about his observations as a teacher. As someone who was a product of the Great October Socialist Revolution, he believed that the sole purpose of education of their time was to prepare young men and women to serve the cause of the communist state. 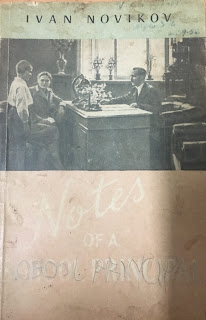 Clearly the state provided a large amount of funds for schooling then and it was pretty standardised and students had to join schools. He writes about the way education was in America and Britain and does not think highly of their methods and the reach, the class system and how the poor there cannot get education. He has many pertinent points as  Principal though about how children must be treated, how to mould them properly despite their errant ways, how to expose them to independent and critical thinking, the role of punishment (again he laughs at English methods of physically punishing children or making them write impositions). The role of parents, of teachers, of the state, of alumni, of the institution. He seems to have involved many experts from the outside world - writers, scientist, entrepreneurs, leaders - to talk to the students, encouraged the students to form clubs and societies. He laments the dearth of Russian literature for children. 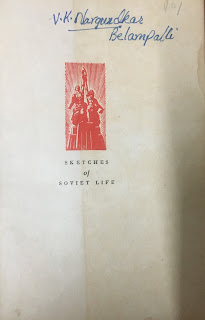 A very interesting book considering the times. There is a mention of Kiev - the most beautiful of Russian cities - and one wonders at what Kiev is going through now. Anyway, just shows how times have changed since then, but the true spirit of teaching remains the same. It is signed by Shobha's father who probably owned and read this book.

Posted by Harimohan at 8:26 PM