This book deceived me for 40 years now - with its cover and its title. It belongs to my father's book collection, one that was pretty large with a wide array of topics and authors, and sat along side several Wodehouses, Robins, Chases, Forsyths and more. Almost all the books are now gone, some eaten by moths, some destroyed by bad handling and lost during transport, some taken away and some given away. Today I kick myself for being rather careless with that collection though I realise that as a ten - fourteen year old I could not really do much about it. But the memories remain and hang on with their smells and feelings. 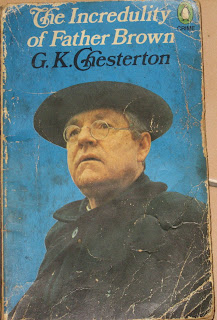 The pencil mark on the book shows that it was brought in 1973 for Rs. 6 in Warangal. I certainly remember seeing that earnest face of Father Brown on the cover of this book those many  years ago. The title appeared serious and of some religious nature and I never ventured near it. All the Forsyths were done, all Wodehouses, all Harold Robins too, but never this one. In spite of my partisan attitude towards it, somehow the book hung on, outliving and outsurviving all of its other colleagues, and presented itself to me at various times. As my own collection grew I found that it is the only one of my father's collection left and since it is is pretty good condition, left it amongst the shiny new ones.

The book chose its time for me and I sat down to read it now in 2013. In the first page I realise that Father Brown is a delightful character and not some drab moral preaching priest, a man of God but more interestingly a detective who specialises in solving murders and other crimes. I'd have never believed it. Then I realise that it is actually a series of eight crimes, presented as short stories, and a pretty delightful reading it was too what with Chesterton's lovely use of the language. Father Brown breezes through cases that include The Resurrection of Father Brown (where he arises from the coffin after his own death), Arrow of Heaven, Oracle of the Dog, Miracle of Moon Crescent, Curse of the Golden Cross, Dagger with Wings, Doom of the Darnaways and the Ghost of Gideon Wise. Each one as intriguing as the other and fine reads as no other. Father Brown himself is a busy and interesting character who observes and suddenly comes through with his solution from the most unusual view points. Chesterton moves lightly over time periods, descriptions and creates a rapid pace for the stories.

What makes this book so unusual is that it uses the Father to solve cases that appear to be miracles of God. In his own responsible manner Chesterton makes a case of being rational through his protagonist, to see the facts as they are, and not attribute the same lazily, to some supernatural force. Some cases, including the first one where Father Brown who appears dead for all reasons and awakens just in time, have been structured just to keep the masses aware that God is in his place and crime in its own. I loved the fact that he chose such a religious character to temper extreme views on religion and the misuse of religion, miracles, occult, curses and black magic by creating circumstances and characters to plead and show the path of reason. I cannot imagine any writer showing half as much imagination, courage and responsibility as Chesterton did in 1926, which was when this book was first published, and taking such a responsible and clearly stated case through delightful stories. I do not think any book can match this book for its rare and unusual content, its fine storytelling and its quaint language. Great piece of writing and for all those who say that fiction writing or a work of art cannot be based on a belief system, or that it cannot be entertaining and responsible, Chesterton's work gives a fitting answer. Fiction can be entertaining, educative and responsible and can shape thought for ages. This book could be relevant even today.

I am so glad the book waited for me and thought I was worthy of the wait. Perhaps it was to convey this thought that I could write fiction and still write responsibly. For that, thank you Father Brown. Back to the shelves now.
Posted by Harimohan at 10:26 PM