A one-day trip with Vasu and Ranjan to a project site near Nagarjuna Sagar took me to this interesting place called Satrasala a few days ago. Nagarjuna Sagar is about 150 kms from Hyderabad, a distance you can cover in 3 hours (or less) and we drove past the Ethipothala falls, passed the Macherla town and took a turn near Rentichintala.


The project was on the river Krishna and it was an impressive sight.

The 1400 km long Krishna itself is an impressive sight and to me, it does show signs of its dark and tempestuous nature, as opposed to the more tranquil Godavari. After the Ganges (2525 kms) and the Godavari (1465 kms), the Krishna is the third longest river in India. A few minutes away from the site was the ancient Shiva temple, one of the oldest they say, standing all by itself on the banks.

Ranjan and I went to the temple. It was a small complex that had many temples - the Shiva temple being the most prominent. Pilgrims congregate during Mahasivarathri in large numbers from villages near and far. 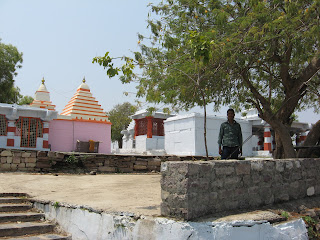 There are many satrams or choultries built for their stay. The barricading and the lighting could be seen, indicating the popularity of the temple among its devotees. From one side there are steps that go down to the river and across the river one can see another temple.

The priest told us that the legend goes that Sage Vishwamitra was performing a penance here when he was disturbed by a demon Kakeshwara. The angry sage went to Ayodhya, sought the help of Lord Ram and Lakshmana to destroy the demon. They obliged him and vanquished the demon. Sage Vishwamitra then returned to the site and started his penance again after consecrating the Shiva linga. It belongs to the Dwapara yuga according the priests. 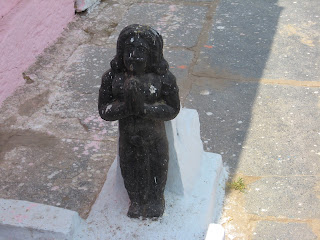 The structure though painted recently shows signs of old temple architecture with huge granite slabs placed in a manner that gives it immense strength and stability. No bolts and screws, just the way they are placed together. How did they move those slabs up there and place them so precisely? We sat for a while at the temple and returned as the famous Rentichintala heat picked up. It was already 43 degrees C there at 11 in the morning - Rentichintala features as the hottest place in Andhra Pradesh on a regular basis with temperatures often going up to 50 degrees C. 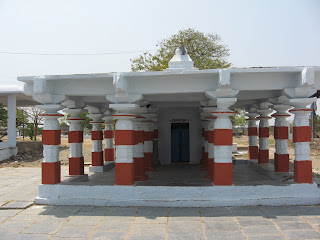 It never amazes me to see the number of temples that are existing, that are in ruins, and the numbers that are being built. In every village that we pass, we can see signs of a new temple being constructed on a hill top or any other place - sometimes in the middle of the road. Not just temples, we find as many mosques, dargahs and churches too.The money and effort that is involved in building these temples, mosques and churches boggles my mind especially when we are aware that most are built by ordinary mortals and not some rajahs and maharajahs of days gone by. 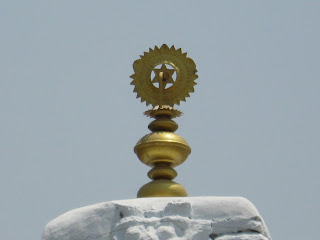 We stayed over at Nagarjuna Sagar for the evening as it was too late to return the same night. 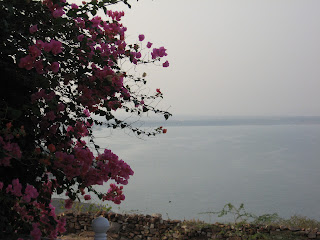 I like the Haritha Resorts suite, which was pretty reasonably priced at Rs. 2500. Service is a bit slow but the rooms are really comfortable.
Posted by Harimohan at 10:08 AM