Much recommended by many and I finally got my hands on this 1995 film. I have always liked Ethan Hawke and am surprised that he did not do much more with his many talents. 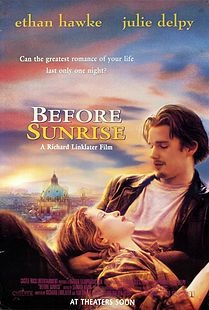 'Before Sunrise' is about two people, an American boy and a French girl who meet on the train. He is on a loose end after a broken love affair and she is heading to Paris to attend University - she is single too and coming off a broken relationship as well. They get talking, find each other easy to talk to, and when the time comes for the boy Jesse to get off at Vienna, he convinces the girl Celina, to get off too. The idea is that they roam about the streets of Vienna talking to each other since they seem to share this great comfort. And so they wander around discussing their loves, life, death, sex and all those things they feel about which is very interesting to listen to. Next day she has to go and they break their original pact not to see one another again and decide to meet in six months time at the railway station. It is obvious that they are deeply drawn to one another and are going to really miss each other. The parting scene is well done and their sense of missing one another beautifully brought out. But the scenes where they talk to one another pretending they are on the phone with their best friends, and the empty shots of all the places they visit during their walk (as powerful as the ones in Cinema Paradiso where he replays all the scenes that the priest deletes) stood out for me. One movie that I could watch many times.

Loved the premise of the movie. And am glad I did not see the movie before I wrote my second novel 'If You Love Someone...' which also has its two protagonists walking around Goa for three days as college students and promising to meet again after thirty years. I am now keen to watch the sequels 'Before Sunset' and 'Before Midnight' that came in later.
Posted by Harimohan at 7:21 PM