The Qutb Shahi tombs in pictures 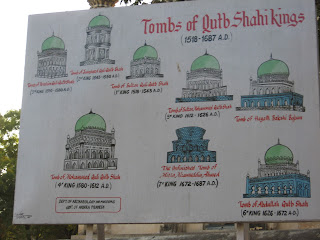 The Qutb Shahi dynasty ruled Golconda for 171 years (1518-1687) until their defeat at the hands of the Moghul emperor Aurangazeb's army. It is said that the Golconda was breached only through treachery, else Aurangazeb's army laid siege for almost a year without a breakthrough. The Quli Qutb Shah kings were a Turkman Muslim dynasty with Persian leanings and were instrumental in bringing Persian culture to Hyderabad.

The first ruler Sultan Quli Qutb-ul-Mulk originally served the Bahmani sultan Mohammed Shah. When the Bahmani sultanate disintegrated into five Deccan sultanates (Bidar, Bijapur, Golconda, Ahmadnagar and Berar) he broke away from the Bahmani kingdom and established the Qutb Shahi dynasty of Golconda. They were known for their patronage of fine arts, were not a heavily militarised state and were overall a peaceful state. The Qutb Shahi rulers were Shia muslims who were conquered by the Sunni Moghul armies of Aurangazeb. 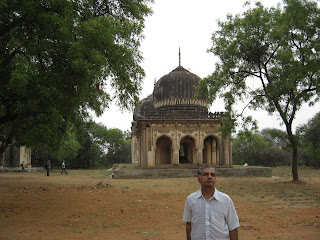 The first tomb of sultan Quli Qutub ul Mulk was built in 1543 by the sultan himself during his lifetime as was their custom. All the sultans of the Quli Qutub Shahi dynasty, except the last sultan Tana Shah, are buried here. The second sultan Jamsheed Quli Qutb Shah’s tomb was built in 1550 A.D. and this tomb rises in two stories unlike the others. His tomb stands midway between his father’s and grandfather’s. 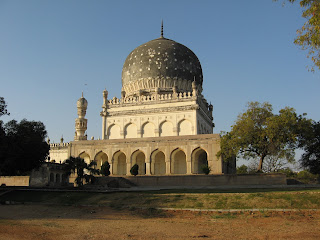 The third sultan Ibrahim Quli Qutb Shah’s tomb was built in 1580 after his death. The sixth sultan Muhammed Qutb Shah’s tomb was a grand tomb built in 1602. We can see some of the fabled enameled tiles still. The last tomb to be built was that of Sultan Abdullah Qutb Shah in 1626. The last sultan Abul Hasan Qutb Shah (Tana Shah) was held prisoner in Daulatabad fort near Aurangabad by Aurangazeb where he died.

There are tombs that belong to other family members and friends of the royal family as well. The tomb of Fatima Sultan, sister of Muhammed Qutb Shah, stands near the entrance to the tomb-garden. Tombs of royal doctors (hakims) - Nizamuddin Ahmed Gilani and Abdul Jabbar Gilani - built in 1651 also stand there just as the tombs of Premamati and Taramati, the courtesans of Sultan Abdullah Shah. Another tomb belongs to Neknam Khan the commander-in-chief of the Carnatic built in 1672. 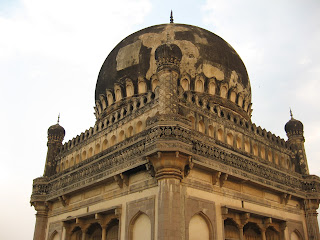 There is a dargah of the Sufi saint Hazrat Hussain Shah Wali, the builder of Hussain Sagar in 1562. There is a mortuary bath opposite the tomb of Mohammed Quli where the royal bodies were washed - which is built on the lines of the Persian baths. The tomb-garden houses a masjid too. 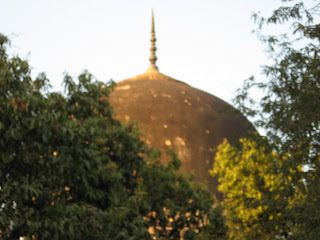 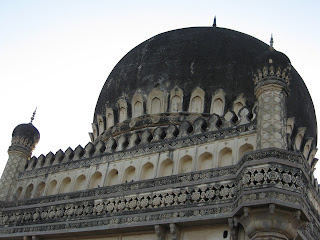 The tomb of Hayat Bakshi Begum, daughter of the fifth sultan, Muhammed Quli Qutb Shah, wife of the sixth sultan Sultan Muhammed Qutb Shah, and mother of the seventh sultan, Abdullah Qutb Shah, deserves mention. Interestingly the tomb-garden of the sultans of Golconda was used to entertain the poor every day, free of cost, through song, dance and plays. 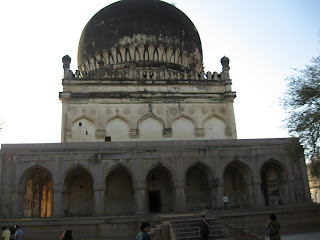 It is a magical experience to walk by in the tomb-garden and it is a place that could be vastly improved by taking better care of the lawns and gardens. 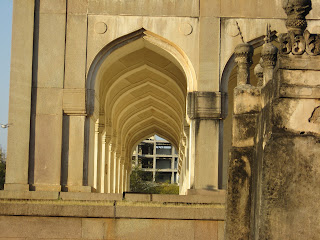 There are cultural events that still take place at these tombs. In fact since the tomb garden was a place meant for entertainment for the general public they should have more music, dance and plays here. Even without, the tombs offer a great opportunity for photographers, many of whom were busy taking pictures, lots of entertainment for children and for tourists.Go early or later in the evening or better still, plan it in such a way that you can get to see Golconda fort as well. But prepare for lots of walking and climbing if you're doing both.
Posted by Harimohan at 12:29 PM