It's been on my mind for a while now. I wanted to visit Warangal and see, really see, the Thousand Pillar Temple, the Ramappa temple  (which I visited when I was very young) and the Warangal fort (which I never visited). We stayed in Hanamkonda, which is a town contiguous to Warangal, for four years in my childhood but I never made it to the fort for some reason.

Memories of the Thousand Pillar Temple were vague and old and I remember a rather uneven floor, many pillars (which we tried to count being the sceptics that we were) and a temple that needed some restoration and repair. After all it was a 1163 AD temple built during the reign of Rudradev. The Kakatiya dynasty ruled this area, including the Golconda, before the Bahmani kings took over the Golconda.


So, when we got an opportunity to go to Warangal with my sister Nalini who had some work there, we started off early in the car. We left Hyderabad at 7 and reached Warangal by 1030 or so, stopping for breakfast on the way. The roads in decent condition, toll road from Uppal to Bhongir (toll of Rs. 105 for two way), and a rather narrow single road the rest of the journey. Travelling a road that I passed by many times in my childhood I suddenly realised how much I had missed earlier. The Bhongir fort is one, sitting atop a huge hillock, one that must certainly be scaled one day. Lovely piece of work.

Then I saw a very interesting structure, the Princeton Junior College which looks like a pre-Independence structure built by the British with its dome at Jangaon.

The many rocks reminding one of the rocks of Hyderabad as one reaches Kazipet, the huge round hillock at Kazipet, my old school St. Gabriel's in all its splendour, the old buildings of Hanamkonda.

Much of Kazipet looked familiar despite the decades gone by (I stayed there during 1974-77) and I could find my way about it easily. Hanamkonda seems to have grown. 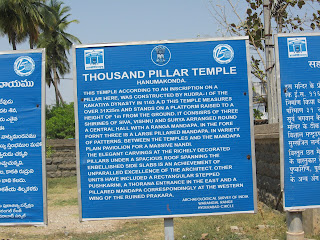 I also detoured a moment to take a peek at the bungalow where we stayed for four years then, one that offered many childhood memories filled with Enid Blytons, cricket, mangoes, trees, swimming, friends, rocks and wide open lands.

Anyway we passed by the quaint town hall which looked like a Pre-Independence structure itself and found the thousand pillar temple. It appeared to have shrunk because I remember there being more pillars, corridors etc.

The temple itself is a trikutalaya, with Shiva, Vishnu and Surya as the presiding deities inside. Intricate carvings on the pillars, the typical Kakatiya style of construction with heavy granite slabs, a huge basalt Nandi facing the temple, make the thousand pillar temple an awesome sight.

Between the three idols, only one of which is now functional, the Shiva temple, is a rangamandapa. An old pond on the outside, an old entrance mark the area of the star shaped temple. The temple itself is supposedly built on a platform which is raised 1 meter above the ground.


It boggles the mind to think of the weight of the structure. Apparently, the temple was so designed by the famed architects of the Kakatiya reign that one could see the deity from any point in the temple and the building near it without any pillar obstructing the vision.

The sculpture, the architecture, the sheer perfection of the work makes one wonder. What happened to such thought, such art, such dedication to work to creation? This was not just a flight of fancy, it involved detailed plans, perfect calculations and perfect execution. They do make you feel pretty small.

Despite the heat there were quite a few visitors to the temple. We brought some prasad and headed out after spending a while in the temple and around it. From there we decided to head to the Warangal fort and see the famed toranas of the swayambhhu temple there.
Posted by Harimohan at 9:47 AM