Sue Townsend is back with Adrian Mole in my life and it was a fun, easy read. Mole's diaries have been lost when he was picked up by the police on suspicions that he could be aiding terrorists for possible anti-TWAT (The War Against terror) activities. Ah, never was having Mr. Mole back in my life so refreshing though it might not be as much for him. Sent off to a council house with two children to look after, no real job, as a single parent and one who is not really good at that, his writing career going nowhere, his love life being zilch, one would think Mole's life is super tragic. It is really but Sue Townsend makes it funny and I enjoyed it thoroughly. 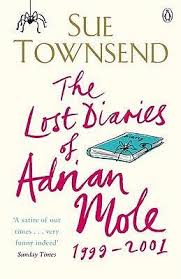 Anyway Adrian finds the diaries that pick up form when he is arrested. His mother and father (biological) have married the parents of the love of his life and the current MP from their constituency, the vivacious Pandora. Both sets of parents are as dysfunctional as ever. Adrian himself has two children, William from an African tribal queen Jo-Jo (now divorced of course) and Glenn from some one else. He brings a ninety seven year old lady home for some reason to take care of her (before she passes away quietly) and falls in love with Pamela Pigg who is in charge of accomodation for the homeless it appears like. Anyway the relationship is doomed as Adrian discovers that he is not drawn to her sexually despite her best overtures - perhaps because of her penchant to break down and cry at the first instance and a sex life that does not get started despite many attempts. From Mohammed, the BP fuel station owner and his childhood classmate at school, his criminal neighbours Ludlows, his psychotherapists, his doctors, his new boss Eddie, his new love at the superstore, we think we have seen all until his half brother from his Dad's earlier indiscretions, Brett Mole arrives. We are also exposed to Adrian's literary pursuits and small glimpses of his writing - whether it is 529 page long poems or new novels such as Sty a.k.a. The Last Pigg, Adrian's life brings much relief to us to know that most people's lives are like ours.

Funny and easy on the mind and the eye, Mole puts you in a good frame of mind. Thank you Sue Townsend. You are one of the funniest writers I have had the pleasure of reading.
Posted by Harimohan at 1:24 PM