Watched it finally. Borrowed from Chimu. Ghost Protocol or Mission Impossible IV brings on full scale action in the James Bond style, only this is American, so there is no British humour to offset the action. Sadly no romance either as Tom Cruise is devoted to his wife unlike Mr. Bond who is not devoted to anyone and therefore, is far more interesting. 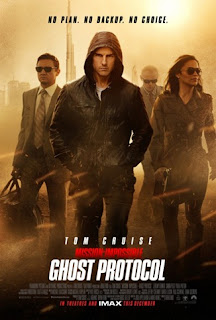 Tom Cruise replays Ethan Hunt the IMF agent who along with his disavowed team of four (one good looking girl agent, one analyst who is an ex-agent and a British gadget guy who brings on the funnies) have to stop a nuclear war between Russia and America. Activation codes are required to start the nuclear war and the exchange of codes for diamonds is the place where Hunt and his associates must strike.

Head to Dubai from Moscow and some super action sequences on the Burj Khalifa and we are soon heading to Mumbai to meet the Indian playboy tycoon Brijnath played by Anil Kapoor. Anyway after a lot of arm twisting and running about and all that, the team stops the nuclear warhead from firing - which we all knew would happen anyway. But who's complaining. There is much action, not a moment to relax and the world is safe.

I am glad that there were no snakes and charmers and no monkey brains this time, no kings and elephants either - but we have Anil Kapoor who portrays a weak, juvenile kind of a villain who is easily infatuated by attractive women. Typical, stereo typed, yuppie Indian? Perhaps. Who cares? Corny dialogues too but we don't go to watch intense dialogues in these movies. The back stories of the agents, their families and love lives drag us here and there. Overall it's a watch once and then watch the action scenes if you want kind of a story. But like I said - no complaints.
Posted by Harimohan at 12:46 PM