Unusual? Yes. Entertaining? Not as much as the title makes it out to be. Now I have a problem with the title itself after seeing the movie. 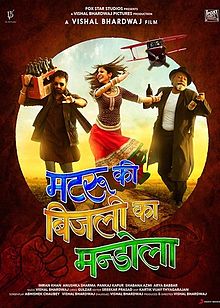 As one would expect these three are people - Matru, an emotionless, English-speaking rebel who drinks desi liquor with his boss (played excellently by Imran Khan who can do both very well), Bijli, a slightly weird daughter of a single-father, rich man (played by Anushka Sharma who fits the part and all the clothes she wears) and a fully weird rich man called Mandola played by Pankaj Kapur. Now the rich man wants to convert the village lands into an SEZ if the villagers in his area sell them. Also interested in the SEZ is a politician Shabana Azmi who specializes in turning on and turning off the rich man Mandola through a series of footsies under the table which seems to be all the action the two are getting going by their reactions. She is also scheming to get her son married to the wanton Bijli and appears to wield much power over the seemingly sex-starved Mandola (why else would he behave so with someone so unsexy as this lady friend?).

Matru we hear is a lawyer from JNU and a socialist student leader who has been going around under the name of Hukum Singh. Now why a student leader from JNU ends up as a car driver I did not get but what one gets is that he did not do much justice to his law going by the juvenile ways he come sup with to save the villagers. I can understand the village idiot coming up with that plan but not Mr. Hukum Singh a.k.a. Mao Tse Tung, who urges the villagers through laal messages.

But the real hero of the film is a pink buffalo called Gulabo. This Gulabo buffalo appears before the rich man (who holds the key to all motives in the movie) whenever he gets drunk on a local brew which is also called Gulabo. When not drunk Mandola is a capitalist, when drunk a socialist who imagines that he sees Gulabo. Matru is a socialist when drunk and when not drunk and his type of socialism is calling himself Mao and sending messages to the villagers who have no clue what a Mao is. Bijli is just hare brained and for someone who has studied at Oxford and shows a rebellious streak to the extent of wearing revealing clothes in the village pond, restricts herself to talking and behaving like a retard. Not surprisingly no one loves her and even Matru seems to marry her because he has nothing else to do in life.

If you ask me M ki B ka M is an experiment by Vishal Bharadwaj that has gone wrong. Not good my friend. Less than half way into the movie you know you made a mistake. But you hope that the charisma of Pankaj Kapoor saves the day for you. He does a great job by himself but its like an orchestra when only one person is playing well and rest are trying to hold up the props and the conductor has got all his sheets wrong. Some serious rethinks are now due for Vishal Bharadwaj and even for me who would want to see all his movies without any reservation. Not after this one.
Posted by Harimohan at 11:23 AM