I never learnt so much about India in the pre and post Independence era as I did from this book as on date. Superbly researched and well told 'Freedom at Midnight' tells the tale of India's wildly fluctuating fortunes from the moment Lord Mountbatten came to India as its last Viceroy, with express orders to formulate the exit plan for the Raj's withdrawal from India. Coming sometime in January 1947, the charming and efficient Mountbatten would resolve what appeared to be a simmering crisis within India in just about eight months, including the partition of India and the transfer of power to two governments in India and Pakistan. The story reads like a thriller, with its unimaginable scale of human drama, political intrigue, human will, misery, greatness and evil. Truly, no fiction can ever come close to being as dramatic and as complex as real life. 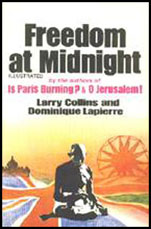 The main players are Lord Mountbatten, Gandhi, Jinnah, Nehru and Patel, the Maharajas and the common people of India. Gandhi is clear he does not want a divided India. He has already humbled the Raj in its mind with his fantastic path of civil disobedience and non-violence, his obdurate rejection of the British law, his means of fasting to death to get what he wants. Chasing an almost Utopian dream with the highest of ideals that he followed rigorously, and expected everyone else to follow as well, Gandhiji comes across as an incredible figure of human grace, saintliness and political cunning. He also shows amazing clarity of thought and understanding of what India needs and is all about. Jinnah is a sophisticated, alcohol drinking, non practising Muslim and the champion of the Moslem League, who with his intransigent ways gets what he always wanted, the separate state of Pakistan. Whatever happened, Jinnah could not be denied, even at the cost of Gandhi famously saying that India will be divided across his dead body. Nehru with his romantic idealism and socialist ideas and Patel with his hard ways and realistic approach to the ground realities completed the cast of the main players. Mountbatten dealt with all these leaders, their fears and desires, with the 545 princely states and their eccentric rulers and carved out the India we have today. One cannot even understand the scale of the job he had done.

That Jinnah was diagnosed with tuberculosis and did not have too long to live was a fact that no one knew until well after the formation of Pakistan. This well kept secret is what got Jinnah his Pakistan. The Radcliffe line dividing India and Pakistan was drawn by Cyril Radcliffe, a person who knew nothing of India, a line that caused lakhs of refugees to die in the madness of the partition. This line and its boundaries were not revealed until after the Independence was granted to both nations. That Gandhi was in Calcutta on the day India got independence trying to stop Hindu Muslim riots from flaring up with a crazy fast he undertook with a Muslim leader in a communally sensitive area. He was to be proven far more effective than the 55000 strong force meant to guard the Punjab border which saw the worst of crimes committed, train loads of bodies, murders, rapes, pillage as innocent Hindus and Sikhs fled from Pakistan to India and Muslims fled from India to Pakistan leaving everything they had. The sheer ferocity of the attacks on innocents by Muslim goons and Sikh and Hindu counterparts is unimaginable. Canals full of blood and bodies, people killing their families to save them from rape and murder, forced conversions. And to think that both Nehru and Jinnah naively believed that the partition would be peaceful by and large. It was only Gandhi who predicted the large scale violence that could happen if the country was torn apart.

The stubborn Nizam of Hyderabad, and the King of Kashmir and how these two large states were finally integrated into India is another story just as the quirks of the many Maharajahs make for interesting reading. The plot to kill Gandhi, the failed first attempt on January 20, 1948, and the successful second attempt exactly ten days later, the unimaginable inefficiency of the police to catch the accomplices of Madanlal Pahwa who was caught at the site after the first attempt blowing up a grenade, the resolve of the Hindu fundamentalists Nathuram Godse, Narayan Apte, Gopal Godse, Badge, Pahwa to eliminate Gandhi for the crimes he committed on India - for living even after the partition and for going on a fast to have the Indian government hand over the 550 million it was bound to but which it did not, are stuff that makes up this real life drama.

But towering amongst all this madness is the little man from Gujarat, Mohandas Karamchand Gandhi, who with his amazing clarity and commitment to his principles brought not just the Raj to its knees but almost the entire mad population of India which seemed keen on killing one another if it was the last thing they did, first in Calcutta and then in Delhi. To use the paradox always, fighting a war with non-violence, to quieten the anger of people who lost everything by offering to kill himself by fasting, to offer the throne to the Moslem even if India  remained undivided, to tell the victims to allow themselves to be sacrificed and die and thus remain the victors, Gandhi had the morals, the wisdom, the vision that far exceeds anyone. His deeds speak of his convictions and read like fantastic fairy tales - how his love conquered everything. Almost. His story is one that none can forget - of the lawyer who could not speak to save his life in England and almost died of shyness, the one who discovered his voice in South Africa when he raised it to fight racial discrimination.

Gandhi's death and the scenes thereon are described in graphic detail and its wonderful to read this touching and moving account by the two foreign writers. The many stories they chose to tell of common people, Boota Singh and Zenab, Ram Lal, the many British officers, the Maharajahs are fascinating to read. How this mad bunch of fragmented states and peoples came together and formed a nation is amazing. It is also amazing to see the clarity of the writers when they say how India would have been better off if it followed the path of Gandhi and his principles and not followed the route of industrialisation and technology. Gandhi wanted power in the rual areas and that is where it should have been. His work on the Untouchables, the marginalised, women upliftment, secularism or rather humanitarism is wonderful. His many quirks, mud packs, enemas, his sexual abstinence, his habit of not speaking on Mondays to save his vocal chords and writing on small scraps of paper made from the envelopes he received, his writing with pencil stubs, his spinning of the wheel as a form of earning his food, his use of the fasts, his almost 3000 days spent in jail in his life, his penchant to be punctual, his monk like existence are wonderful to read. Similarly the work done by the Mountbattens, Louis as the Viceroy and Edwina, in the refugee camps and with the Red Cross, is wonderful. The work of the V.P.Menon and others is also no less in securing Kashmir by getting Raja Hari Singh to sign his consent to accession by India and several other crises is laudable.

It humbles one to know of the legacy we have inherited, the sacrifices of the many that went into forming this nation we call India. The tireless sacrifice, of their own lives, their families, the freedom of the many leaders, common people. The erudition, the commitment and courage of the leaders is one that makes one wonder. Where are men like this? When will India find leaders of such stature again? It is incredible to know that India was given its freedom on the stroke of midnight of the August 15 and not on the 15th itself because astrologers foretold that if India was to be given independence on the 15th, the stars forecast ruin for India.

I am glad once again that I read another classic, this one much closer to my heart as it is about India, at this stage of my life when I can appreciate the history from where we have come. It is now time to examine how we use this freedom we have been gifted by our fathers and take India to the next level. For all Indians, 'Freedom at Midnight' is a must read to know some many facts about how we achieved what had seemed an impossible dream - our freedom, our becoming one.
Posted by Harimohan at 11:47 PM

Dude, This is one of my favorites. I am glad you have read it. Plan of Gandhi's assassination and the story there after reads like a racy thriller. Nehru's speech, Kashmir and the great divide are living in my mind long after reading it. Thanks for the review.