Highly recommended to me by several friends of mine 'V for Vendetta' did not disappoint. Based on a comic book of the 1980s, the movie is set in 2030 or thereabouts where Britain is run by an authoritarian regime led by a ruthless 'Chancellor' who has taken over power by deceit. (America, everybody's big brother, is already in trouble thanks to a bio-terror attack and troubles with Midwestern countries.) Britain's new government run by the Chancellor, who has seized power by putting the same fear of bio-terror attacks in Britain unless some levels of purging happens instantly, runs concentration camps and eliminates all those who do not fall in its definition of purity based on race, sexuality, religion and almost all the things that Hitler's regime was known for and more. The media is also controlled by one channel, state owned. 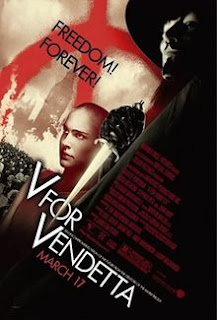 The movie begins with a girl (Natalie Portman) who works in the state run television being assaulted on a sidewalk by the government's fingermen. She is saved by a mysterious man in a Guy Fawkes mask who shows extraordinary fighting skill with knives and wards off the fingermen. Speaking eloquently and politely from behind the grinning mask he then takes the girl to a rooftop to watch the blowing up of an tall structure accompanied to music in the streets. The government covers it up as a planned demolition but they know a revolution is on. That evening the man in the mask, V, takes over the television station and gives his address, and urges the people to accompany him on the demolition of the Parliament on the 5th of November, a year from then, to protest against the atrocities of the government, on Guy Fawkes Day. While escaping from the television station where he creates a lot of confusion with replicas of his Guy Fawkes masks, he is helped by the girl, who is now under police suspicion. V takes the unconscious girl home and tells her about his plans. She identifies with him and his cause but when she realises he is killing government officials including the bishop, she escapes and goes to her friend, a comedian on the television channel.

The comedian is killed by the party that very night for a spoof he makes on the Chancellor and the girl witnesses the murder. She is also captured and tortured and asked to give the whereabouts of V which she refuses to do. She somehow gets to see little messages from a neighbour in the prison cell which describe of the horrors of the Chancellor's party. How the young girl next door was captured because she was a lesbian and had a Koran with her, how all these 'social deviants' were sent to a facility where a vaccine for the deadly bio-terror which the Chancellor has already used to create fear among the people by using it in a school, a tube station and a water facility which kills several people, was being developed. All the social deviants die a horrible death except one, who emerges stronger from it, disfigured and maimed, but with nothing affecting him. He is V, the man who is on a mission of revenge against the state. V has killed almost everyone who has been on that program where humans were used to develop the vaccine and killed or disfigured. The vaccine is sold by pharma companies that make money for the Chancellor.

The girl now understands the plot behind V's emergence. She also realises that she has not been abducted by the government but by V, who wanted to test her against fear. When she shows no fear of death he lets her go.  V falls in love with her, gives her the choice of sending the explosives to the Parliament in a secret underground tunnel, sends out millions of Guy Fawkes for all the protestors and kills off both the Chancellor and his Minister before suffering fatal injuries. Not before saying a great line - 'I am an idea and ideas are bullet-proof'. The girl decides to blow up the Parliament and is actually helped by the Police Chief who is also against the totalitarian regime while thousands of protestors wearing Guy Fawkes masks throng the square braving a headless military.

'V for Vendetta' is highly engaging and gripping. The grinning Guy Fawkes mask (also looks a bit like the Count of Monte Christo, a film that V watches often), rebellion, the cause for it could have been anytime and anywhere - a call for protest against state oppression and deceit against people. By using the faceless V and the girl's final statement that V is all of us, it delivers a strong message. You are responsible for your freedom, for your safety and cannot leave it all for a few people to take control of your destiny. Highly recommended viewing fir its unique.style of telling the story
Posted by Harimohan at 11:04 AM