Watched 'Moneyball', the Brad Pitt starrer, a real life story based on a book by Michael Lewis about the 2002 campaign of the Oakland Athletics baseball team. The unsuccessful player-turned-scout  Billy Beane (Brad Pitt) is the General Manager of the Oakland Athletics team which has just lost three star players to other teams. He has to put together a good team for the next season with limited financial constraints. Beane realises soon enough that if he goes through the regular route of scouts, players replacing players, based on their valuations and expectations, he may end up with the same result and probably no job by the end of the season. 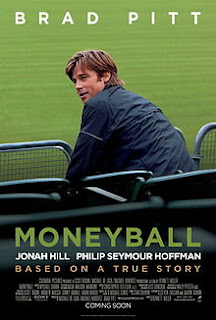 While negotiating players with another club he meets Peter Brand an economics student from Yale who has not played professional baseball (or from the looks of him any baseball). Brand tells him of how he values players using a statistical method that values players on their On Base Percentage which gets him several highly undervalued players. Some of these players are too old, are not seen as classic players by the scouts and coaches, but they are drafted in. The scouts, coaches and the team manager do not agree with this composition and the team starts to lose. When push comes to shove Beane trades his star players so the manager has no option but to play the new players. The new team, put together at a far less payroll than some of the big ones, wins 20 games in a row, a record in American League. His new undervalued wards do the team proud though the team loses in the playoffs. The Boston red Sox management sees the wisdom behind Beane's system and offers him a General manager job at 12.5 million which he turns down and stays with the Oakland Athletics.

I was disappointed with 'Moneyball'. Save the statistical theory of Brand, and his belief in his new system, Beane's team shows little to justify why the Oakland Athletics won those games. There is some amount of motivation, some amount of confidence building that goes on by Beane but overall it was largely unconvincing as to what really made the team win those phenomenal twenty games. The idea seems interesting but there is obviously far more that went into the campaign than the composition of the team and that is where I found the movie disappointing.

The best payrolls do not guarantee the best results nor do the worst payrolls. What does guarantee results is the conviction one has in an idea - be it statistics, player capabilities, trust, space, a desire to prove. It is often the ones who have no pressure that do their best and come up with upsets precisely because they have no pressure and want to prove something to someone. If at that same time they find a management supportive of them, that could well do the trick.

Overall the movie was a tad slow, had far less content backing the theory than I'd like and was rather one dimensional in its analysis. I also did not find anything in Brad Pitt's performance that deserved a nomination in the Best Actor category. Among true life incidents made into sports movies this movie goes to the bottom of my pile. Disappointing because it did have a wonderful story, of using a different approach, a scientific approach to winning. If it had also included some other aspects of winning, it would have been a fine movie.
Posted by Harimohan at 12:02 PM