Slim at 200 pages and easy to read, Murakami's 'After Dark' lingers on in your mind for long after you have read the book as do his other works. Haruki Murakami is one of the most unique writers one can read, because he has a viewpoint that is stunningly different from most other story tellers. It is not front on - it is in the shadows, in the gaps, the spaces, the whispers. All that we cannot capture, he does. His characters seem to speak as they think, real time, real life, and shift effortlessly into situations, past, present and future that seems ordinary, but yet have so many possibilities. There is an underlying element of excitement, a rhythm to the stories, even if two people are having coffee. Rarely is there explicit violence, action, sex - it has all happened before or there is a possibility. We only watch the characters as they tell the story. There is music playing on, there is food, there are human emotions all intermingling making it all very real and lively. 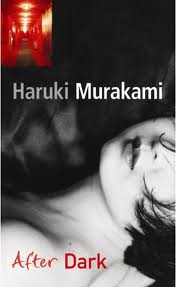 'After Dark' is a seven hour story, starts at 12 in the night in a slightly unsafe area of Tokyo, sometime after the last train has left. The next train is in the morning. A 19 year old girl Mari, soon to be on an exchange program to China, is in a cafe reading a book. She is joined by a young man Takahashi, who sits at her table as the place is full. He reminds her that they have been out on a date with her older sister Esi and another friend of his. She is not really interested. After the coffee the young man, a jazz musician who goes to the University to study law, leaves. Shortly after a lady comes over, an ex-female wrestler who runs a 'love hotel'. a customer has badly wounded a Chinese prostitute and left without paying. Could Mari translate Chinese to her? Mari is told that Takahashi has told the lady that Mari knows Chinese. Mari helps the lady and waits till the pimps pick up the badly beaten girl. The love ho owner passes on information about the guy who beat up the girl complete with a photo from the cc tv. We know that the customer who beat up the girl is a perverted software engineer who steals all her clothes and belongings. Takahashi meets Mari again before dawn and they discuss her older sister who is now in some kind of a sleep, from which she does not wake up. Takahashi tells Mari that her older sister had told him that she would like to be closer to her younger sister. When Mari goes home she cuddles up to her sleeping sister who shows signs of waking up. The mafia is after the software engineer. The next day dawns. The book ends. There are numerous possibilities after that but you know what would happen, and are at liberty to imagine the endings you want.

Murakami leaves you in a unique space, neither here nor there, in between. Surreal I believe is the word I am looking for, but somehow, I feel it does not fully justify what he does. He specialises in leading you to the spaces that we only feel, we normally do not read of in novels or stories, thoughts that are as good as whispers in one's own mind, seemingly solid characters who open up slowly into layers of weaknesses, doubts and fears. A girl in a two month old sleep, her sister out to be on her own all night trying to conquer her own fears, a jazz musician who is confused about what he wants to do in his life, a perverted software engineer leading a double life, a mafia looking out to save their business, a love hotel called 'Alphaville' and its owner who has a soft core.

Add to it Murakami's own method of giving a soundtrack to the novel - there is always a song playing - there is always food, drink, cigarettes, booze. He creates the world for us, not as a part of it, but like a voyeur. It is about loneliness, this book, about people trying to cope in the big city. For Murakami fans it is a nice, easy read and as with all others, a must read to enter the world of his.

Posted by Harimohan at 2:55 PM

For me at least, he is the best writer of his kind-actually haven't found anyone of his kind yet. I think the way he describes emotions is unique.