Rather late but I did make up my mind to see this movie in the theatre after seeing and hearing all the fabulous reviews it got. Funnily my first impression when I saw the posters were - what the hell I am not going to watch this movie but everyone who saw it was unanimous in their praise. Something that had not happened to a movie for many years and I wondered why. So I went yesterday with Shobhs and saw the movie in Padmavathi where it is playing for an incredible 80 odd days in an era when the DVDs are already out and to a decent crowd as well. I must also mention that it is in a small way that we pay our debt to the vamps of yesteryears 'Silk Smitha' in particular who spiced up many movies in our youth with her sizzling numbers, her smoky eyes and her pout. She was something else, coming after the overweight Jayamalini, Jyotilakshmi and their gang who were good dancers and the original item girls but Silk Smitha redefined it all with her looks, her figure etc. Thin vamps were in after that. 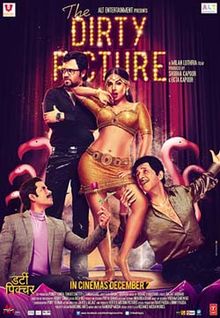 Anyway less about Silk and more about the movie. Inspired by the life and unfortunate death of Silk Smitha the South Indian siren, 'The Dirty Picture' is a well made ode to the ones who make it on their own - the Silks and many like her who have suffered similar fates. (Wonder why so many heroines and women actors kill themselves or die lonely deaths?) The high spirited young girl who lives in poverty in her village runs away from home and backed entirely by her guts, her desire to make it big and her ability to understand what the viewing public wants and adapt accordingly, Reshma, the village bumpkin becomes the bosom heaving, hip thrusting 'Silk'. Using her charm and the weakness of a superstar for new women, she gets more powerful and her star keeps rising. But the country bumpkin that she is, she reaches too far, swallows too much, makes a few mistakes and finds herself struggling in the uncompromising and cruel world of films. She looks for love rather naively in her superstar Suryakanth and does not find it, she finds it with his brother and loses it. Finally she finds it with a director who never liked her but by then it is too late. She has produced movies, made debts, lost her money, has no love and its all too much. Silk kills herself.

Vidya Balan as Reshma is brilliant and she gets under the skin of the role properly. The film grates on the soul as it shows openly what is talked of in winks, in whispers and innuendos, so much that at times you wish it also winked and whispered to you. Silk pushes herself in front of you, too big and bold to ignore and too much to digest in real life, in day light. For keeping that going on and on the director Milan Luthria needs to be appreciated for staying true and on course. Naseeruddin Shah as superstar Suryakanth, Tusshar as his brother Ramakanth and Emraan Hashmi as the director who falls for Reshma are perfectly cast. More importantly for me 'The Dirty Picture' does what few films have done in the recent past for as long as I can remember - it makes you feel for the character, for Silk and her weaknesses, her losing fight with the world, the injustice of it all as she refuses to buckle down and be someone she is not. When she loses money in her film, when she seeks roles, when she dies and in many other moments one cannot but help feel for the poor village kid, because that is what she finally remains. Well done team and you deserve all the awards.

I'd like them to talk about Silk Smitha too when they get their awards and with a touch of reverence. At least they should give her the respect she deserved for doing what she wanted to and believed in. Silk Smitha's life is if I remember right, began from Eluru, a town in Andhra, in highly impoverished circumstances and she made her way up despite her unconventional looks, dark skin, bedroom eyes and pout. She is a classic example of how one can use their strengths best if one knows them. Pitched against the reining dancing queens - fat, white and who relied on excessive body movements to titillate, Smitha brought a new angle of seductiveness into the vamp. From the hard, shake and grind dances we moved into the come-hither-baby times as Smitha used her body, her eyes, her voice to leave a lasting imprint on her viewers. Where the others jumped on you, Silk drew you to her.

One can only imagine the hurdles she would have faced and the loneliness that she would have experienced in her journey in what is certainly a male dominated world of films in South India. To have a fine film made by this classy team which has made a classy film on her life itself is a wonderful ode to her life.
Posted by Harimohan at 4:39 PM

Reminds me of a Hollywood film, Fedora. By the way, It's on Suhita's wishlist if you can find it somewhere. Fedora, I mean.