Another from the great Sagar treasure trove of movies 'Rhapsody in August' is Akira Kurosawa's movie about the bombing of Nagasaki by the US and how it is dealt with 45 years later by three generations of a family - a grandmother who suffered the bombing, her postwar children and her new economy grandchildren. 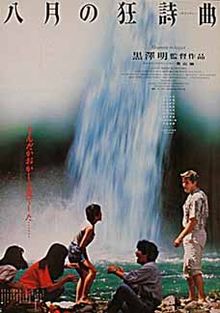 Left with their grandmother who has lost all her hair in the bombing, saved only because she lived in a village covered by mountains some distance away from Nagasaki on that deadly day, are her four Big Apple-Yankee-loving grandchildren, cousins, perpetually draped in all the US branded clothes. The movie begins with a letter form one of her many brothers Suzujiro, who has settled in Hawaii and done well for himself, married an American woman and has grandchildren of his own. The brother wants his sister to visit him in Hawaii and sends her his pictures with his children and grandchildren. Grandma does not even recognise him, though she is clearly very lucid in her memory otherwise. The cousins are angry with her because they are losing out a chance to go to Hawaii and try to convince her to make the trip.

Meanwhile one of the older cousins takes the younger ones on a tour to Nagasaki and shows them the school where their grandfather died on the day the bomb was dropped, in the school. They see the twisted memorial of a monkey gym on the school premises, pay their respects to it, see the spot where the bomb was actually dropped, see the water fountain kept with the stone engraving mentions that all victims died asking for water, see all the monuments sent by all countries. The youngest of them innocently asks his sister where America's monument was and is told that America was the one that dropped the bomb. The experience changes his attitude a bit towards America and his grandma who he learns has been a teacher just like his grandpa. She is no more the 'stone head with some reeds on her head'.

Grandma relates tales of her brothers as she sits with her grandchildren on the moonlit courtyard often scaring them. She tells them of her brother who drew eyes, his recollection of the day of the bombing. She does not recognise the brother in Hawaii still. However when confirmation arrives that he is really her brother when he correctly names their family members she agrees to go, after the memorial service to her husband on August 9, the day of the bombing. The news is conveyed.

The parents of the children who had been in Hawaii and who expect some part of the rich inheritance of the old relative, fear that mention of the bomb could put off the American side of the family and they may disown them. When grandma's brother's son, the half American Clark (Richard Gere) sends them a telegram that he would be coming to Japan they fear that he is coming to sever ties. But Clark comes with peace and spends time with his aunt, at the memorial, the school and they all plan to go to Hawaii together. However his father, grandma's brother, dies and he has to leave early. Grandma loses her balance as well, guilty that she has not been able to see her big brother sooner, has hallucinations of the bombing again and in the end is seen running towards Nagasaki to protect her husband. The entire family runs after her in the rain to protect her form harm, their priorities clear now.

For story telling Akira Kurosawa is fantastic.  I loved the way the story flowed simply, the generational gaps, the slow uncovering of their history they were not even aware of, the Japanese-American undercurrent, grandma's own reconciliation with her past and the way it catches up with her finally. A movie that would have jerked present day generation into introspection.

It has a lesson for all of us. After this generation there will be no further reference to that period (also for us a period when we got our independence) save history books and monuments. I always wonder how this rich treasure trove of elder citizens is left by themselves. They are all witnesses to a time we had not been in, a culture we have not experienced. But we let them die, without exploring any of their thoughts, impressions and feelings. Must watch. Must imbibe and must interact with the old people now.
Posted by Harimohan at 10:19 AM