I had only heard that 'Karz' the Hindi movie was based on this strange sounding movie. Finally got to see this 1975 thriller based on the concept of reincarnation on Raja's recommendation. 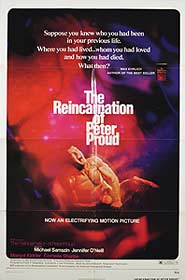 Professor Peter Proud is hounded by recurring dreams where he sees people, places and finally one naked chap who is murdered by a woman who he calls out to as Marcia. Proud can't sleep with these recurring dreams of a rather unpleasant nature and consults a doctor who is doing some research on dreams. Doctor's research finds that though Peter Proud has been dreaming away, his machines are not recording them. The troubled Peter Proud catches a building on television that appears like the one in his dream (who says tv is bad?) and follows it up. The place is in Massachussets and he goes there and finds the places he keeps seeing, the people he wants to meet. He sees the bungalow where the man in his dreams is killed. By now he knows he is the dead man, finds the murderess who is the wife, finds and falls in love with the daughter (who is funnily his own from his previous birth). When the murderess wife realises that he is the reborn man whom, she killed (and successfully got away the first time), she is back to repeat history all over again. Will Proud be different this time or will he end up as he did the last time is the question. The ending was rather unexpected to me.

Apparently at that time when the movie was released the reviewers and critics were harsh on the movie and its plot. Maybe it had something to do with the reincarnation angle which had not caught on to the science driven America of those days. However these days it may have more acceptability with all these Oriental ideas of karma and rebirth and all that penetrating deep into the American psyche. In those terms perhaps this movie was a path breaker but even as a thriller of a slightly different genre, it worked for me. Fast paced with enough intrigue and action, its worth a watch.
Posted by Harimohan at 3:45 PM