I remember the adrenaline of watching 'Top Gun' in 1986, the year in which I also discovered World Cup soccer and Brazil and Socrates. I was instantly hooked to 'Danger Zone', 'Take My Breath Away' and the 'Top Gun' theme. I still have that cassette somewhere. And, I cannot forget how we rode our fighter planes (my Bajaj Chetak, in death defying stunts on the way back - and survived that). Pure adrenaline. Everyone bought those glasses, those jackets, tried to make 100 cc bikes look like Tom Cruise's bike and well, that was that. 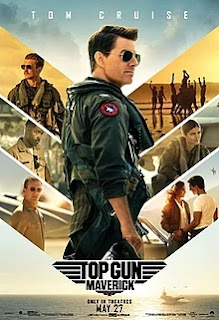 And now, 36 years later, I went to watch the sequel with Anjali at Prasad's and the entire dream came alive. Of course Tom Cruise now looks older and wiser like us, but he still has a few tricks to teach the young uns at the Top Gun school. Dangerous mission, he's brought back to teach, ends up leading - has his old wingman Goose's son to deal with. The movie is more or less predictable but the stunts and the style full make up and we end up feeling very good indeed. So many scenes are reprised - Cruise racing the plane on his bike, the bike, the jacket, the glasses, the fight scenes. Ah. Missed Kelly McGilis. That would have made it complete.

Liked it. So did Anjali.