The Wind Blows Away Our Words - Doris Lessing

I found this book in Aai's collection and brought it home to read. How this book landed up with her - the unabashed consumer of Mills and Boons and Perry Mason's I don't know but it was there. It's a book published in 1987. 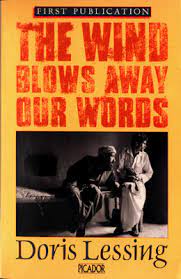 Doris Lessing writes about her visit with other journalists and writers to Peshwar and other places in Pakistan close to the Afghan border to meet the Mujahideen and get their story about their resistance to the Russian forces invasion of their land. She writes about how the Mujahideen is a loose bunch of tribes with a distinct identity that have come together to fight the Russians with almost nothing but the barest weaponry, how they constantly engage in fight, how they lose their children and women to bombings (ty bombs being one ingenious one), how the women are suppressed in their colonies and not allowed to speak unless given permission by the men and so on. There are tales of a female commander but not verified.

Doris Lessing and her colleagues try to get some footage of the people. She writes about the places, the people, what drives them. She writes about their disillusionment with the west and their promises for help. She also ends the book on the note that the Afghans may get some help. At the time she wrote she says ovr a million Afghans have been murdered by the Russians and over five million displaced, offocially refugees.

It's a cry for help. The title is inspired by the words of a Mujahid Commander in 1986 in Peshawar -

"We cry to you for help, but the wind blows away our words."

It's been 35 years since the book had been written and well, nothing has changed really has it?