I think I better hurry through my Pune days before I forget. Sunday was the day of the get together. Milind had ordered food from a local place famous for its vegetarian fare. These places have perfected the art of take away with packs for all sorts of groups. We picked up up a few and returned home. The guets had arrived - Meera, Shashi maushi, Parth, Maria and Manik maushi, Raja and Anu, Neelima and her mother, Suhita, Miskil and Khayal, the star of the show, Mangala tai, Gauri and us four Shobhs, Satish, Anjali and me. It was a fun gathering and everyone caught up. Books were selected and taken away, so were any other stuff that they wished.

Khayal was the star of the show and he followed Anjali around calling out 'Anjaleee' every now and then. Milind's Chinese whisky was tried. I spent some time with Shashi maushi and asked her my favorite question - so what is the biggest lesson from life that you learned? 'To be content with what you have,' she answered immediately. In a while Shobha, Gauri and Suhita joined us and I left. The party slowly drew to a close at around 3 pm and Anjali had by now decided to visit Harsh, her friend from school who had now moved to Mumbai. She said she would travel with Suhita and come back after a day. So off she went with them. The evening chilled out after everyone left.

The next day was article writing day so I got busy writing and sending my article off in the morning. We got Satish's beds dismantled in the optimistic view that the packers may be equal to the task. The carpenter was but the packers weren't. IPL games were the order of the day I guess.

Anjali kept updating us of her shopping with Suhita, going to meet Harsh. She sent a pic of them both - he now looks like a big boy - and they apparently went off together in a rickshaw to try some chaat. That evening Vaishali, Harsh's mom dropped Anjali off at Bandra in a local so Anjali had a local experience as well. And then she proposed the big idea - can I come by myself in a bus? Its been less than a month since her first outing by herself in the metro but I liked the way things were moving so we said she could. She booked herself into a Shivneri Mumbai-Pune bus for the next afternoon and chilled off that evening there.

We headed off to Magarpatta on Monday afternoon to spend an evening with Gauri and Prakash and hopefully Kalpak. We took an auto and went off. Raja was already waiting there. Gauri's garden was beautiful. Some chai and then I went out for a walk in Magarpatta as the evening came on. I returned in time to catch up with Prakash and Gauri and there was a bit of talk about the house and he advised us about it. Kalpak helped big time as he translated what we were saying to Prakash and vice versa - the technicalities! A nice meal and we set off back home.

Next morning was time to make plans to pick up Anjali and Milind offered to come with me to Bremen chowk which is where she would alight. We coordinated with Anjali on Google Maps and found she was a couple of hours late thanks to a traffic jam. Anyway it was quite something to see her lugging her luggage across the busy road and come over - my baby has grown up! I asked Milind if we could visit the Pune University the next day and show Anjali a glimpse of how Universities are inside. It was fun catching up with Anjali and listen to her Mumbai stories. Another milestone achieved. I suspect we drank some beer that evening. 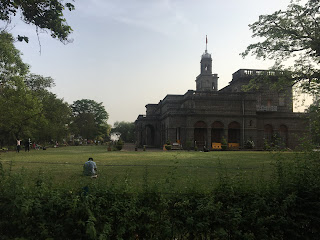 The next morning we set off early at 630 to Pune University for a walk. Shobhs decided not to come so it was Satish, Milind, Anjali and me and we had a grand time walking inside the beautiful University. We took a lot of pics, I checked out the vast grounds at the back and remembered Amit Patil and Manohar from Pune University against whom we had played the Vizzy Trophy, and then we headed off to Barometer. We found a nice place; Shobhs joined us. Some nice continental breakfast and were good. Barometer is a good place to eat.

Ashu and Ajit wanted to meet for lunch and we fixed up to meet at Krishna Lunch Home on Law College Road. Now Krishna Lunch Home serves proper Maharashtrian thalis so we ordered thalis and enjoyed the sumptuous meal after which we headed back home. One more day and it was time to head back homeward but with a stop at Bijapur and a visit to Nargund - the land of the Nargundkars. Satish has just developed some signs of gout and we checked for Uric acid and it was high. Don suggested some medicine and we started winding down after a hectic trip.

Posted by Harimohan at 2:04 PM