It's a fascinating book with much insight into the world of meditation, mantras, yoga, human evolution and growth. Swami Vishnudevananda (1927-93) was a disciple of Swami Sivananda and was the founder of the International Sivananda Yoga Vedanta Centres. He established the Sivananda Teachers Training Courses. His book 'The Complete Illustrated Book of Yoga' is considered the bible of yoga. A peace activist, he flew peace mission in conflict ridden areas. He created an 'Om Namo Narayana' bank in the Himalayas. 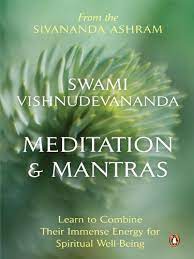 The book starts with the simple question - why meditate. To find out the meaning of life. When we go deep into meditation, over time and over years of Sadhana, we discover the infinite well of wisdom within where we find the answers. What comes between us and our truth, is the mind, on which are grooves or Samskaras created by Vrittis (thoughts). Samskaras can be good or bad but they can get in the way through Ahamkara (ego). Meditation subdues the ego. Our thoughts are made of vibrations.

The source of our wisdom is the self. To go deep into our self we must eliminate our karmic debts. To do that we can choose any of the following methods - Raja Yoga, Karma yoga, Jnana yoga, Bhakti yoga, Hatha yoga, Kundalini yoga.

A simple guide to meditation

When we concentrate, hidden psychic and occult powers are awakened by the mind. With these powers yogis have been able to see distant objects, hear distant sounds, send messages to all parts of the universe, heal people sitting miles away, move to distant places in no time etc.

They say that there is no limit when the human mind merges with the Cosmic mind.

Concentration clarifies, reduces senility. Concentration is the first stage of meditation. Meditation is nothing but concentration. Beyond a point however, the mind cannot be controlled in meditation. A good yoga practitioner follows this route - Prathyahara (withdrawal of senses), Dharana (concentration), Dhyana (meditation), Samadhi (superconscious state)

There are five types of behaviors of the mind

The purpose of life is to focus the mind on the Absolute. Concentration opens the inner chambers of love and as it leads to meditation, is the sole key to the reality of eternity. The average person has only 10% conscious control of his mental powers.

The foundation for practice of concentration is built on right conduct, healthy body, steady posture, breath and withdrawal of senses.

The first five form the basis for concentration. Develop attention on everyday situations. A person with good concentration can complete the task n half the time and twice the accuracy.

Establish the practice - focus on the Ajna (between the eyebrows), Anahata (heart) while in meditation

Be patient and regular with the meditation practice.

Meditations are of two types -

Samadhi is the highest goal to be achieved through meditation. One can choose any route - Raja yoga, Mantra, Kundalini, Jnana, Bhakti yoga

A mantra is mystical energy encased on a sound structure. Mantras contain a certain power. The mantra is constructed from a combination of sounds derived from the fifth letters of the Sanskrit alphabet. Sanskrit also called Devanagiri - the language of the Gods. Mantras release spiritual energy in the chakras of the body.

Krishna mantra - for all encompassing love

Sound is the seed of all matter. Word, sound and mantras are integral. 50 articulate sounds or varnas, each sound having its own colour - Sanskrit is derived from them.

Japa channelises one's energies form lowest to highest level of pure thought. It is a direct way of self realisation. Typically a guru initiates one into the mantra.

Mantras are Sanskrit invocation of the hygiene. Neither mantra, deity nor guru, once chosen should be changed. Persevere. Saguna mantras are deity mantras.

Mantras fulfill these conditions -  are originally revealed to a sage, has a presiding deity, has a specific meter, has dynamic power Shakti, there's a plug that conceals the pure consciousness hidden in the mantra

Use a japa mala - focus on the ajna chakra, the anahata chakra

Kunalini Shakti is the culminating meditative experience of Hatha Yoga under a guru. In Kundalini meditation the divine power that lies dormant in every human  is aroused and pulled up through the Chakras. The masculine passive force Siva resides in the Sahasrara Chakra and the feminine active force Shakti, lies at the base of the spine, dormant and potential. Its the pristine, psychic and spiritual power.

Hatha Yoga awakens the Kundalini by disciplining the body, purifying the Nadis, the astral channels through which Prana flows, controls Prana and regulates flow of Prana by locks and seals called Mudras and Bandhas.

Kriyas - Cleansing techniques
7 psychic centres - Chakras, the Sushumna nadi which is the passage through which the Kundalini rises
72000 Nadis, most in Sushumna, the astral counterpart of the spinal cord, on either side of it are Ida and Pingala nadis, Prana flows through these Nadis and as long as it flows through them we are bound by time and space, when Prana starts flowing through the Sushumna, we are not bound by anything
Sushumna flows from the Muladhara Chakra to the Brahmarandhram at the top of the skull

Within Sushumna is Vajra, within is it Chitra nadi - the heavenly way, within it the Brahma nadi

The 6 Chakras are way stations along the Sushumna to Sahasrara

When the Kudalini  is dormant the petals hang down, upward in ascendancy
Focus on Chakras chanting OM

Jnana Yoga - Vedantic Theory
Wisdom - intellectual approval, inquiry, analysis
Vedanta is the body of knowledge based on ancient texts. It means the end of the Vedas, and is based on Upanishads.

Vedanta has a triple basis - scripture, reasons, experience. It is about exhaustive intellectual enquiry, intuitional experience.

Maya is the reflection of Brahman. Maya creates the idea of limitation

Until we see reality, we experience Avidya, ignorance, dissociation from all sheaths. There's no difference between dream of sleep and dream of Maya at Turiya

Vedantic parts - neti, neti
control ahamkara - ego
I AM BRAHMAN is possible only through reflection

Adhyaropa - principle of Superimpostition. It superimposes the mind with pairs of opposites, illnesses resulting from ignorance of real objects. See everything on the Self. Real love begins when people are seen, not as indviduals but as beholders of self.

-Neti, Nei - process of negation (not this, not this)

Aham Bahma Asmi - I am Brahman (identify with the Supreme)

Tat Twam Asi - That Thou rt

Bhagyata Lakshman - meaning of a word is approached in three ways

It is the royal path of mind control. Most comprehensive God realisation. Patanjali is the greatest psychologist of all time.

Yoga is the union of individual with the universal soul, calm mind. Yoga restrains the activities of the mind.

Citta is the lake, vrittis are waves. Activities carried on in the physical plane is also a mirror of the inner workings of the mind

Dharana is fixing the mind on one object.
The unbroken flow of perception between mind and the objects is Dhyana (meditation).
Samadhi is merging of the mind into the essence of the object of meditation. Nothing exists but pure awareness.
The practice of the three is Samyama, By mastering Samyama comes the light

Dharana, Dhyana and Samadhi are internal. Through constant replacement of thought waves by control, the mind is transformed and gains mastery of itself. ts flow becomes undisturbed through repetition.
One pointedness occurs when the contents of the mind that rise and fall at two different moments are exactly the same.

Karam may be either dormant or active, by performing Samyama on both, and though omens, the yogin may know the time of death

When the cause of bondage has been eliminated, the mind can enter another's body through knowledge of its channels. From the ability to control the elements come the eight Siddhis such as making the body small etc. Only through realisation of the difference between Sattwa and Purusha comes omnipotence and omniscience

Siddhis are attained as a result of herbs, mantra or samadhi. Minds are created form egotism. Kaivalya is that state of mind in which gunas merge in their cause having no longer a purpose in relation to the Purusha.

Visions, loss of consciousness, light, separation from the body, vision of God

It is a comprehensive book that clearly lays out all the little pieces that sound so disparate to us - Vedas, yoga, meditation, mind, rituals, chants, prayers, karma. We have heard of these in different contexts, tried to understand and practice them separately but have not been able to put them all together. This book puts it together effortlessly and one can get a good picture of the whole and choose one's way to go about trying to achieve god realisation or to merge with the Cosmic state or even to achieve a state of superconsciousness. Or just to make sense of it all.

For that, thank you Swami Vishnudevananda. I loved the peace missions of his, flying over conflict zones at great risk to himself, chanting Om Namo Narayana. As with all such books I made some notes to refer later which I put up on the blog - may not make sense but just looking at the sheer detail they have gone to in classifying and sub-classifying is fascinating. Such great work and we wonder why it was kept hidden.