Can't really call this a book review but it was a very interesting book that I found in Aai's collection. The author is a very accomplished person as we can see form the book and the book itself is an attempt by him to present life's many mysteries in a manner that would make it easier for people to handle life. 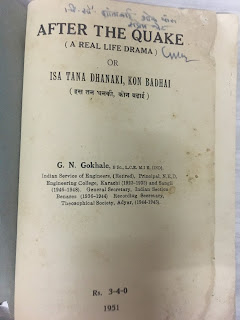 The book is a play - about a rich man who is planning a party at his place and a sadhu walks in and says don't hold the party inside the house. The rich man laughs it off and soon enough an earthquake demolishes the house and kills everyone in it - except the rich man's wife. A stream of characters then come into the play - a servant, a man who cheats, a woman who flirts, a daughter abandoned - I could not make much sense of the story as it became more and more abstract later on. 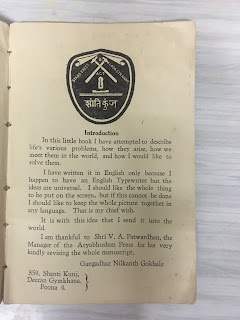 Gokhale saab wrote that he hoped someone would make a film of it. Hopefully someone adapted it to a play.

Posted by Harimohan at 8:20 PM