Soon after I posted Sridhar's list of books to read along with his interview about books in my blog, I shared the link with our mates from the MBA class. Among the many encouraging words that we recieved from our friends, there was also a request from Bijju to Sridhar, asking him to review a book that he liked. The '7 Habits..' sits right at the top of Sridhar's list and it took him less than half an hour to review the classic, explaining lucidly the 7 habits, analysing them and making them relevant even to the layman. Clearly Sridhar has read the book many times and I remember him mentioning in the interview that he referred to it every once in a while to see if he is on course and how he compares. Here then is Sridhar's succint yet comprehensive review of Stephen R. Covey's 'The 7 Habits of Highly Effective People.' 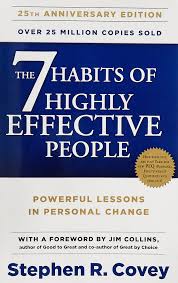 Another way of looking at these habits is to see them as a means to move a person from dependence to independence and on to interdependence. The author believes that interdependence is a far greater virtue and is the underlying principle that governs the functioning of the world. He illustrates that belief in independence as a human goal is like playing tennis with a golf club! An instrument not suited for the game!

The 7 habits are codified as:
1. Be proactive
2. Begin with the end in mind
3. First things First
4. Think win - win
5. Seek to understand then strive to be understood
6. Synergise
7. Sharpen the saw.

Be Proactive
These 7 habits have to be viewed sequentially with first habit leading the way.
Covey exhorts that proactivity is the primary habit which in turn engenders the formulation of the succeeding habits. Proactive behaviour presupposes that the response to any stimulus is not based on emotions but based on predetermined values to which one holds accountable to. He is thus “responsible “. A proactive person is one who holds himself accountable to a set of predetermined values.

Begin With the End in Mind
Begin with the end in mind is the next habit. Only a proactive individual will be able to develop the habit of this highly intuitive habit. Just as we have a destination and the route in our mind the author expects each of us to chart his own course to a well thought out goal. He illustrates this habit with an imagery in which one is invited to attend his own funeral and eavesdrop on the comments made by the mourners. Covey urges us to determine one’s long term goals based on what one expects to hear from the mourners- wife, children, colleagues, friends etc. and then embark on the journey to achieve these ends.

First Things First
The third habit comes into play once we have the long term goals in place. Structured short term planning template is discussed in this chapter. Covey postulates that we all have multiple roles to play on a daily basis. For example a woman may see being a mother, wife, doctor, daughter, sister etc as some of the roles she plays. Each of these roles can be visualised and compatible goals can be set for each  role. Thus when a man conducts himself in the short term he will have to prioritise his activities based on the inter-se primacy of the goals.

Taken together these three habits constitute “private victory”- a victory over moods and emotions in subordination to predetermined values or goals.

The next three habits tell us how to achieve “public victory “- a victory in interpersonal interactions with others.

Think Win-Win
Habit 4 is that of “Think win-win” which is a prescriptive paradigm to view interpersonal conflict where both the contestants are vying to get the better of the spoils. Win- lose and lose-win are seen as adjustments which are inferior goals while lose-lose is not at all an option. Win-win process starts with both parties agreeing to explore options which are more beneficial to both than what each of them would have got by thinking win- lose. The mindset that underlies win - win thinking is termed as “ abundance mentality” - there’s enough for everyone- as compared to “scarcity mentality” which  presupposes that there is only a limited amount out there and the winner takes all leaving nothing to the loser.

Seek to Understand, Then Strive To Be Understood
Seek to understand, then to be understood priorities listening to others over talking. The author states that the listener should carefully understand the emotions and the logic of the person to whom he is listening. Only when we know both will we be able to respond effectively to the other person. After listening with an intent to understand, the individual must seek to be understood with equal effort. Preparing an effective presentation must have three components- ethos, pathos and logos. Ethos is the essence of the reasoning which includes the credibility of the presenter. The next part of the presentation must bring out the emotional aspects of the argument. Logos is the final part of the argument.This part of the presentation focuses on the logical arguments in favour of the proposal. Covey stresses the need to follow this sequence of argumentation while making a presentation.

Synergy
The sixth habit is that of “Synergy”. Covey states that all the earlier habits serve in cultivating this all important habit. Synergy is a situation when one plus one can become three, or eleven or zero. This is dependent on the quality of the relationship between the two entities or individuals. If the understanding between the two individuals is excellent, then together their output is manifold to that of what they would have produced individually. The essential concept Covey propounds is the need to “Value our differences “. He urges us to respect this dictum and encourage another viewpoint before taking a final view. He postulates that difference in viewpoints after seeing the same data is not logical but psychological. Each one views things not as they are but as he is i.e as per his own upbringing.

Sharpen the Saw
The seventh and the final habit “Sharpen the saw” enjoins us to improve ourselves on all 4 dimensions. Physical, emotional, intellectual and spiritual aspects. Proper diet and exercise for physical renewal; reading classics for the intellect; the emotional dimension is renewed when we practice Habits 4,5&6 in  interpersonal behaviour and meditation and prayer help us renew the spiritual dimension on a daily basis.

...
Thanks Sridhar for sharing your review. It may be a good idea for you to give a talk based on the book, with your own experiences and examples, since you have imbibed its principles so deeply. It could benefit many and change their lives.

As for the book, I believe this book must be owned by everyone and the 7 habits practiced. Definitely a book one must read. Also an apt gift for those you love. So, to practice the first principle, proactively go and get a copy, for yourself or for someone else you love.
Posted by Harimohan at 10:42 AM

Thanks for giving me an opportunity to write on your blog Hari. I do keep talking about the book to my children and others whenever there's a context.

My pleasure Sridhar. Do review more. I would love to publish your book reviews on my blog.